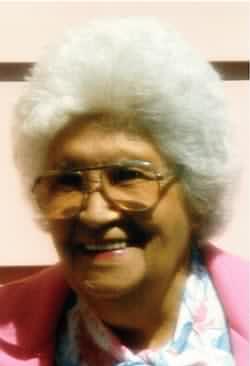 Isabel Gallegos, 91, departed this life May 12, 2001, at home in Brighton, Colo., following a lengthy illness. Mrs. Gallegos was born on November 17, 1909 in San Francisco, Colorado to the union of Aniceto Medina and Lucrecia Taylor Medina. She married Damacio Gallegos on February 14, 1941, in San Luis. She was a housewife. Survivors include her son, Bill (Theresa) Gallegos of Brighton and daughter, Lorraine (Ron) Befort of Aurora. She also raised her granddaughter, Lorrie (Bonefacio) Vigil of Pueblo and is also survived by four additional grandchildren, nine great grandchildren, and her sister, Celina Montoya of Denver. Mrs. Gallegos is preceded in death by her husband, Damacio; son, Gilbert; daughter-in-law, Linda; and grandson, Randy. She will lie in state at the funeral home from 9 am until 5 pm on Wednesday. Services will be held at St. Joseph Church, 1145 S. Aspen with the Recitation of the Rosary at 7:00 pm on Wednesday and Funeral Mass at 10 am on Thursday with the Rev. Fr. Robert Carden as celebrant. Interment will follow at Roselawn Cemetery.