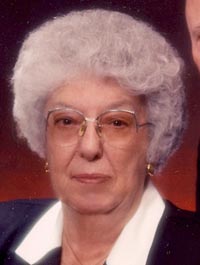 Iris Lambert Hall, lifelong resident of Pueblo, loving wife, mother, daughter, sister, aunt and friend, passed away November 6, 2005, at Parkview Medical Center in Pueblo. She is survived by her devoted husband of 57 years, Marion L. (Hatch) Hall, of the family home, her son and daughter-in-law, James M. Hall and Winifred E. Parker, of Livermore, California; brother, James M. Lambert of Boulder Creek, California; and nieces and nephews, Linda G. (Larson), Thomas C. and Christopher B. Tomky of Rocky Ford, Colorado; Laura Ann (Tomky) and Robert Cassiday of Hudson, Colorado; Cari Jo (Larson), Robert, Jeffrey, Justin and Amber Keeney of Pueblo; Edith, Nancy and Brian Lambert of Canon City, Colorado; James M., Nicki and Cristi Lambert and Linda (Lambert) and John Shivers and Jack Provinzano of Boulder Creek, California; David and Jinny Vigil and family of New Mexico and many dear friends who will all miss her. She was devoted to her family and spent long periods caring for her parents, Ira J. And L. Mabel (Peterson) Lambert and her younger sister, Gail E. (Lambert) Larson, all of whom predeceased her after extended illnesses. She was also predeceased by her nephew, Gregory A. Larson, brother-in-law, Wm. E. Larson and brother-in-law and sister-in-law, Francisco A. and Helen (Hall) Vigil. Iris attended the Methodist Church from early childhood. A graduate of Centennial High School, she was secretary at Hinsdale School and W.A. Wills Ford for several years before beginning a 40 year career as a legal secretary. She retired in 1987 after over 30 years with Bartley & Glover Law Office. Iris enjoyed family research and spent many years researching and traveling with her husband to areas where their families had lived. She was a past officer of the Southeastern Colorado Genealogy Society, as well as member of several other societies throughout the country, and served many years as a volunteer in the Family Research Department of the Pueblo Public Library, assisting others interested in researching their family histories. She was also a member of the Pueblo Newcomers Club. During World War II, Iris was a Red Cross Nursing Aide and after the war, received recognition for having served over 1500 hours of volunteer work at St. Mary Hospital. Most of this time was spent in service on the maternity floor. On several occasions when large groups of wounded or ill servicemen arrived at the Pueblo Air Base enroute to military hospitals in this part of the country, she assisted the staff at the Base Hospital with their care until they could be transferred. Later, she was a Red Cross Volunteer Aide for several years in the admitting room of Corwin Hospital. Viewing at the funeral home Wednesday from 10 a.m. to 5 p.m. Funeral to be held at the Montgomery & Steward Chapel, Pueblo, at 2 p.m. Thursday, November 10, with the Rev. Mike Lipinski officiating. Burial will be at Roselawn Cemetery, Pueblo. The family respectfully suggest that in lieu of flowers, memorials in her name be made to the Family Research Department of the Pueblo Public Library through the funeral home or direct to the library. Online condolences, www.montgomerysteward.com