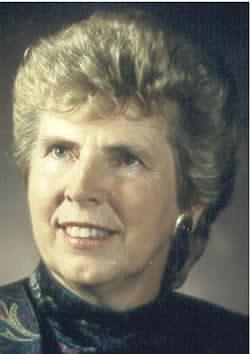 Ingrid Boggess was born on November 4, 1933 in Landskron, Czechoslovakia (formerly the German Sudetenland). She was educated and employed in Bamberg, Germany as an English-German interpreter for the German Government. Following a long pen-pal relationship with Marianne Pettit Cardinal, she came to Pueblo in 1959 to see America on a year leave of absence from her work in Germany. She was employed at the First National Bank of Pueblo as an executive secretary where she met her husband . She became a naturalized American citizen in 1964. Predeceased by her parents Ernst and Anna Schindler, she is survived by her loving husband of 41 years, Jack Boggess; daughter Kirsten (Greg) McLain of Gonzales, Texas; son Kirk (Carol) Boggess of Seguin, Texas; three grandchildren Chelsi, Morgan, and Ian McLain of Gonzales; and brother Ernst (Erika) Schindler of Bamberg, Germany. She was a Community Volunteer. Past President of Pueblo Symphony and Symphony Guild, Past President of Pueblo German Club, Past President of Assistance League of Pueblo (two terms), and member of National Assistance League. Member of the board, executive committee and fund-raising chairman of the Pueblo Community College Foundation. Recipient of the Sunshine Award from Wake Up With Pueblo for outstanding work to the benefit of the community. Member of Pueblo County Historical Society, the Pueblo Country Club, and Rosemount Museum Auxiliary. Past member of PEO, St. Mary Corwin Auxiliary, and the Foundation Board of Parkview Medical Center. Past President of Epsilon Sigma Alpha Sorority and member of Sangre de Cristo Arts Center. She and her husband enjoyed playing golf and dancing until she lost her battle with pancreatic cancer. As per her request, there will be no viewing. Funeral Mass will be held 9:30 a.m. Friday, December 7, 2001, at Christ The King Church, 1708 Horseshoe, with Reverend Father Tom Adrians as celebrant. The family will receive friends and relatives following the Mass at the church hall. Private interment, Roselawn Cemetery. Those who wish, may make memorials to either - Pueblo Community College Foundation or Assistance League of Pueblo, her favorite charities, c/o the funeral home.