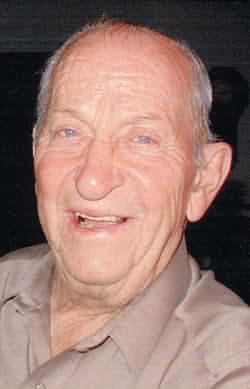 Hurchel Eugene Edmonds, 83, long-time resident of Pueblo, passed away February 19, 2002. He was born July 29, 1918 in Stella, Missouri and retired from Pueblo Board of Water Works in 1986, where he worked in several departments during his 34 consecutive years of service. Hurchel devoted his life to his wife, Emmabelle 'Emmie', and children, Dennis (Barbara) Edmonds, Terry (Rudy) Niznik and Marilyn (Robert) House. He was blessed with eight grandchildren, Garett (Jessica) Edmonds, Jennifer (Cory) Garner, Matthew Niznik, Gregory Edmonds, Elizabeth Niznik, Stephanie House, Christina House, Rachel House and a great-grandson, Travis Edmonds. He is also survived by one aunt, several nieces, nephews and cousins. His memory will live on in the hearts of his many friends and relatives. Visitation will be Friday at the funeral home from 10 a.m. to 6 p.m. The Celebration of Life Service at 2 p.m., Saturday, February 23, 2002, in his home church, Bethel United Methodist, 1201 E. 7th Street, with Reverend Lola West officiating. The family will receive friends in the church hall following the service. The family respectfully requests the omission of flowers; memorials may be made to Bethel United Methodist Church, c/o the funeral home.