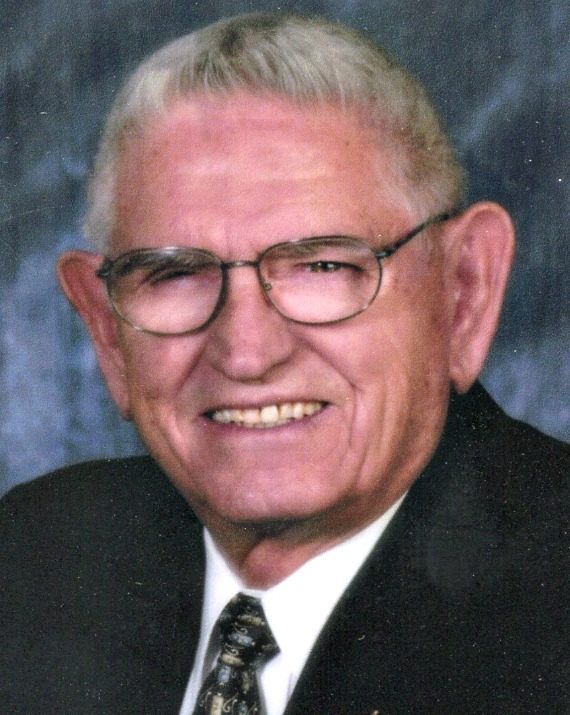 Hoy Eugene Frakes, 88, passed away April 6, 2020, Joni Fair Hospice House in Pueblo. Survived by his loving wife of 69 years, Norma Jean (née Anderson) Frakes; children, Hoy E. (Kathleen) Frakes, Jr. of Austin, Texas, Jody Ann (late Martin) Ottersberg of Pueblo; and Allison Rae (Jon) Budd of Dove Canyon, Calif.; grandchildren, Kylie (Adam) Felzien, Blake (Tina) Ottersberg, Lindsey (Greg) Hengeli, Ashley (Matthew) Bowers, J.C. Budd, Eric Budd; and great-grandchildren, Madison Elson, Mason Elson, Elle Ottersberg, Brit Ottersberg, Jack Hengeli, Emerson Hengeli, and Eli Bowers.
Hoy graduated from Greeley High School in 1950, Colorado State College of Education (CSCE -now University of Northern Colorado) with Bachelor of Arts degree and his lifetime teaching certificate for the State of Colorado, and a Master’s degree in Sports Medicine from Adams State College in 1960. In high school and college, he participated in football and wrestling. He was proud that he was the first student athlete to win the Rocky Mountain Conference Wrestling Championship four years in a row while wrestling for CSCE.
Hoy served in the U.S. Army from 1955 to 1957 as a military policeman. He was proud to serve his country and have his name posted on the Veterans Memorial at Pueblo River Walk.
After he left the Army, he went to Adams State College where he was an assistant football coach and head wrestling coach. In 1960, Hoy moved to Pueblo Centennial H.S., where he taught history and was assistant football, baseball coach and, most notably, the head wrestling coach from 1960-74. He was well respected by his peers as a fierce competitor and adored by his students and scholar athletes. Hoy was inducted into the Greater Pueblo Sports Hall of Fame in 1981, the Pueblo Centennial Hall of Fame in 1983, and into the National Wrestling Hall of Fame in 2010. He served as President of the Athletic Hall of Fame of Centennial H.S. from 2002 until his death.
Sports was not his only interest. He served as the president of the Pueblo Association of Life Underwriters from 1989-1990. He was a member of the Pueblo Lions Club and served as president of the Pueblo Chapter from 2000-2001. One of his passions was to socialize with fellow Model A owners. He served as president of the Southern Colorado A’s and a member of the Model A Ford Club of America. He also loved being a part of the Pueblo Greater Sports Hall of Fame where he served as president in 1996 and enjoyed being the historian.
In honor of Hoy’s life, the family requests donations be made to your favorite charity. Online condolences can be given at www.montgomerysteward.com

The family greatly appreciates donations made to these charities in Hoy Eugene Frakes 's name.