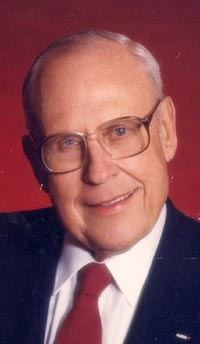 Howard E. 'Bud' Whitlock, 83, passed away Mar. 18, 2007, in Pueblo, Colo. Survived by his wife of 61 years, Martha Whitlock; daughter, Laura Whitlock; granddaughters, Amanda and Hayley Mathews; and sister, Dorothy Jean Nasisse. Preceded in death by his son, Randy Whitlock; parents, Howard and Ruth Whitlock; and sister, Virginia Benson. Bud was born Aug. 2, 1923, in Pueblo. He attended Colorado State University in Ft. Collins, Colo. where he studied Civil Engineering. Bud was a 1st Lieutenant pilot with the U.S. Army Air Corps for three years during WWII. He was the owner and CEO of H. E. Whitlock Construction Co. for 37 years. Bud was very civic minded and dedicated to improving Pueblo. To name a few of the many organizations in which he was involved, he was the negotiator for Southern Colorado Contractors' labor contracts with three unions for 15 years, panel member of the American Arbitration Association for 20 years, member of the Pueblo Board of Water Works for 18 years, director of Pueblo Bank and Trust Co. for 18 years, served one term on City Council and was representative on Pueblo Economic Development and Pueblo City-County Blue Ribbon Committee to select the site for the Justice Plaza. He was a board member of the Pueblo Chapter National Federation of the Blind, Pueblo Development Foundation from 1972 to the present and Pueblo City Council from 1989 to 1993. He also served as president of Pueblo General Contractors, Pueblo Kiwanis Club, American Field Service Student Exchange Program and was the first male president of the P.T.A. at Thatcher Elementary School. Among his many honors, he was exceptionally proud to be inducted into Centennial High School Hall of Fame. There will be no viewing. Cremation, Montgomery & Steward Crematorium. Memorial service, 2 p.m. Friday, March 23, 2007, at First United Methodist Church, 11th and Court, with the Reverend Dr. Rick Calhoun officiating. Those who desire, may make memorials to PCC Foundation or Pueblo Zoological Society, through Montgomery & Steward Funeral Directors, 1317 N. Main St., Pueblo, CO 81003. Online condolences, www.montgomerysteward.com