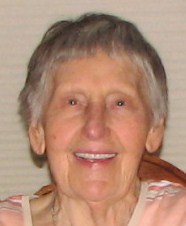 Hilda Habermann, 87, climbed heaven's staircase to grasp the hands of her Savior and Lord Jesus Christ on March 12, 2012, while being comforted by her four children and spouses at her bedside. Survivors include her four children, Helmuth and (Judi) Habermann and Ed and (Barbara) Habermann, Irma and (Richard) Kinnischtzke, Gertie and (Larry) Permann. She leaves behind eleven grandchildren, including Daniel (Viktoria) Habermann, Laura (Nik) Guse, Anita (Habermann) Riggins, Greg (Julie) Habermann, David (Traci) Kinnischzke, Jon (Susanne) Kinnischtzke, Becky (Todd) Combs, Lois (David) Goeser, Gina (Josh) Daniel, Valerie (Randy) Southern, and Jeff (Kim) Permann. Also grieving their loss are 28 great-grandchildren, including Christopher, Noah, Cassandra, Benjamin, Kate Habermann, Madison and Ashley Guse, Ryan Habermann, Emily Phillips and Dylan Riggins, Anthony Habermann, Abbi, Emily, Josh and Lindsey Kinnischtzke, Aaron and Meghan Kinnischtzke, Makala, Trace, Tyler, Orrin Combs, Jaycek and Aneliese Goeser, Bailey Daniel, Bailey Roy, Blake and Colby Southern, and Jude Permann. Finally, three great-great grandchildren, Breauna and Laila Phillips and Kalli Slone complete her string of descendants. Also surviving are her sister, Erna (Martin) Wissinger; brothers, Johann (Kati) Martin, Theodor (Inge) Martin; and numerous nieces and nephews in Germany. She was preceded in death by her husband of 56 years, Oscar Habermann; her parents, Theodor and Rosina (Weller) Martin; her brothers, Reinhold, Herbert and Willi Martin; her daughter-in-law, Sharon (Rand) Habermann; and her husband's parents, Georg and Wilhelmina (Heim) Habermann. Hilda was born March 3, 1925, in Gnadental, Bessarabia, Romania. She immigrated to Cobadin, Romania, with her parents in 1937, and she and her family were forced to flee for their lives in 1941. Over the next five years, she lived in numerous refugee camps in Austria, Czechoslovakia and Germany. She married her husband, Oscar, in a refugee camp in Ybbs, a.d. Donau, Austria, in 1944. After a three-year separation from her husband caused by the war, he rejoined her in Germany, where they resided with their three children until they, and his parents immigrated to Hebron, North Dakota, U.S.A. in 1952. After their fourth child was born, they continued to reside there until she and her husband retired to Colorado Springs, Colo., to be near their families. She lived there until her husband died in 1998 and eventually relocated to Wray and Pueblo, Colo. She was able to enjoy her retirement with family and with the numerous friends she made everywhere she went. She was known as a great cook, baker of outstanding pastries, quilter and creator of many works of art made of threads. In her lifetime, she made well over 100 quilts, for each of her children, grandchildren, great-grandchildren and numerous other friends. She shared her love of Jesus Christ in the way she lived her life, with family, friends and strangers alike, whenever she was near them. Her smile, her accent, her willingness to serve was evident to all those who knew her. Shyness and timidity were not part of her life and she made friends everywhere. Visitation and viewing is from 5 to 7 p.m., Friday, March 16, 2012, at the Montgomery & Steward Funeral Chapel of Pueblo, Colo., followed by a family service at 7 p.m. Funeral services will be held at 10:30 a.m. Saturday, March 17, 2012, at the Pueblo Christian Center, 1605 S. Pueblo Blvd., Pueblo, CO 81005. Following a luncheon, the committal service will be held at Evergreen Cemetery in Colorado Springs, Colo. Memorials given in her honor will be given to her favorite charities, including Gideons International, 1117 E. Boulder St., Colorado Springs, CO 80903 and the Billy Graham Foundation, 1 Billy Graham Parkway, Charlotte, NC 28201-0001. Online condolences can be expressed at www.montgomerysteward.com.