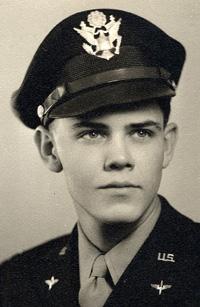 Herbert Neil Woodward, Jr., devoted father and loving husband, passed away on July 23, 2004, in Pueblo, Colorado. Born in Butler, Pa., on September 28, 1924, he is survived by his wife of 58 years, Doris; sons, Neil Woodward of Scottsdale, Ariz., Brent Woodward of Westwood, N. J., and Mark Woodward of Pueblo; their spouses and three grandchildren. 'Woody' retired after 37 years with the CF& I as an accountant. He served in World War II as a B-24 pilot with the 752nd Air Squadron of the 8th Army Air Corps in the European Theater. He was an avid bicyclist, logging almost 70, 000 miles since retirement. H was a 56-year member of the Masonic Lodge No. 31. There will be a gathering for family and friends on Sunday, August 1, from 2-5 p.m. at the family home to honor his life. Private family services will be held later. The family is grateful to the entire staff of Fuente de Vida at Sangre de Cristo Hospice, Dr. Sloan and Dr. Denton for their excellent care. In lieu of food or flowers, memorials may be made to the Sangre de Cristo Hospice, C/O Montgomery & Steward Funeral Directors, 1317 N. Main St., Pueblo, Colo. 81003. Online condolences, www.montgomerysteward.com