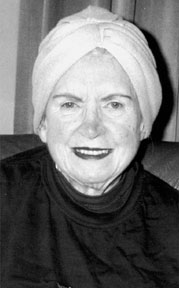 Helene C. Monberg, a Leadville native from an old Leadville family and a retired newswoman living in Washington, DC, died on Tuesday, October 7, 2003. She was 84. Survived by her sister, Rae M. Dabbert, Missoula, Montana; niece, Diane Webster, Taos, New Mexico; nephew, Larry Dabbert, Tacoma, Washington; grand-niece, Jessica Hately, Taos, New Mexico; and by the six sons and one daughter of her 'Washington Family', the late Edward A. J. Chicca and the late Mary M. Chicca, who originally lived in Washington, DC, and later moved to Maryland. Ms. Monberg was born in Leadville on October 19, 1918, the first of two daughters born to Luther Monberg, an insurance man, and Helene Denzler Monberg, a former teacher. Her grandfather, Soren C. 'S.C.' Monberg came to Leadville from Denmark in 1887 to make a fortune in mining, a goal that eluded him. In 1890, S.C. brought his family, his wife Anna and their four Danish-born children to Leadville, including Luther, then five. Later three more children were born to the couple in Leadville. Their family grew up in Leadville, as did Luther's two daughters. Ms. Monberg retained a lifelong interest in her hometown. Ms. Monberg graduated in 1936 from Leadville High School, where she won a four-year scholarship to the University of Colorado (CU) at Boulder, where she graduated in 1940. She received a law degree from American University in Washington, DC, in 1948, but decided to stay in the news business. She started her news work in 1936 at the weekly Leadville Record, and she remained in the news business until June, 1949, when she was forced to retire because of disability. Between 1936 and 1940 she worked in the summers for the Leadville Record and for the Leadville Historical Society writing profiles of Leadville old-timers. After Ms. Monberg graduated from CU in 1940, she worked for the Salida Record and for the Raton, NM Daily Range. In March of 1941, she accepted a job to become the first woman on the editorial staff of Pathfinder Magazine in Washington, DC. After working for Pathfinder for a year and briefly for the War Department, she accepted a job from United Press (UP) to become one of the first women reporters in it's Washington Bureau. She worked for UP from 1942-1947 and for Congressional Quarterly from 1949-1964. Later she marveled, 'Just six years after I left Leadville in 1936 to go to CU, and just two years after graduating from CU, I was covering Eleanor Roosevelt's press conferences at the White House for UP, a wire service.' She was ready but World War II launched her on her news career. In the fall of 1947, Ms. Monberg launched her own news bureau in Washington, on of a handful of women reporters to do so. It specialized in political and natural resources coverage in the west, especially Colorado. She operated her news bureau from 1947-1983. It was anchored by The Pueblo Chieftain and Star Journal. She served numerous newspapers in Colorado, New Mexico, Utah and Arizona. She started her own natural resources newsletter in 1965; it was an outgrowth of her news bureau and was published until her retirement in June 1994. Her work as a volunteer started in the 1960's, when Ms. Monberg teamed up with Ethel Payne of the Chicago Defender to provide starter college scholarships to poor disadvantaged youths in the Washington, DC area. That program lasted for three years from 1968-1970. In 1971, at the request of the DC Department of Corrections, Ms. Monberg undertook the major scholarship program of her life: The Achievement Scholarship Program (ASP). From 1973-1989 ASP provided starter scholarships for college and trade schools for DC area youths on parole and probation recommended by their parole/probation officers. Ms. Monberg received a Washington-of-the-Year award in 1981 because of her volunteer work with ASP. Ms Monberg also provided starter scholarships from 1993-1998 at three Colorado colleges: CU-Boulder, her alma mater; the University of Southern Colorado at Pueblo (USC, now CSU-Pueblo); and Colorado State University (CSU) at Fort Collins. In 1998, on the eve of her 80th birthday she announced she was bequeathing $1,000,000. at her death to the Lake County School District in her hometown of Leadville, to three public colleges in Colorado, CU; CSU; and CSU-Pueblo, and to the Rawlings Foundation in Pueblo to thank her hometown county and state for educating her. The Lake County bequest is for school repairs; the others are for youth programs. Ms. Monberg majored in journalism at CU because she became a big baseball fan in the 30's as a teenager, and she wanted to become a sports writer to cover her beloved St. Louis Cardinals, the 'Gas House Gang' of that era. She did not become a sports writer, but she retained her life-long love of and interest in baseball. Ms. Monberg never married. Ms. Monberg summed up her life near the end: 'I spend 58 wonderful years in the news business in the pursuit of truth. I put up my own dough and raised money for starter scholarships for more than 360 youths, mainly in the D.C. area. And I gave my savings to Lake County School District toward the repair of it's schools, and to three Colorado colleges (CU-Denver, CSU and CSU-Pueblo) and the Rawlings Foundation of Pueblo to spot poor kids in public urban high schools in the Denver/Pueblo areas before they drop out to try to get enough basic written and spoken English and math into their heads so that they might be able to navigate in today's and tomorrow's world. It has been fascinating.' According to Helen's wishes, the funeral will be a simple graveside service at 11:00 a.m., Saturday, October 11, 2003, in the family Masonic plot at Evergreen Cemetery in Leadville.