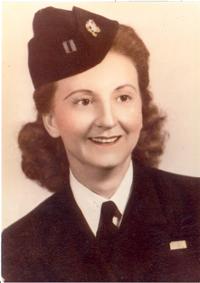 Hattie Belle Smith died in her sleep, Monday, April 16, 2007, to waken in her 'heavenly home.' She was born Nov. 3, 1913, in Naples, Texas, to William and Ophelia Smith. She is preceded in death by her brothers, Clyde, Wesley, S.B., Olin; and her sister, Maude Wilson. She is a graduate of the University of Indiana and received her certificate of nursing at the University of Oklahoma. She began her nursing career in Pueblo at the Corwin Industrial Hospital, and in 1941, joined the U.S. Navy Nursing Corps and was sent to Pearl Harbor after it was attacked. She advanced in rank and served as Chief of Nursing in the Philippines, San Diego, Camp Pendleton and retired at Key West Naval Station as a Naval Commander in 1966. She cared for wounded soldiers and their families through three wars; World War II, Korea and Vietnam. She returned to Pueblo in 1985. Hattie worked as a volunteer while in the Navy and it was one of her passions in retirement. She fondly carried the title 'Aunt Hattie' to many of her acquaintances. She resided at Villa Pueblo Towers and she received great care at the Sharmar Village Nursing Facility. Viewing, noon to 5 p.m. Wednesday at the funeral home and one hour prior to the service on Thursday, at Praise Assembly, 2000 Troy. She was a member of Praise Assembly where her funeral service will be conducted Thurs. at 11 a.m. with her nephew, Pastor Bobby Wilson officiating. Interment will follow at Imperial Memorial Gardens in the Veteran's Court of Honor. Memorial gifts may be made through Praise Assembly or Montgomery & Steward. Online condolences, www.montgomerysteward.com