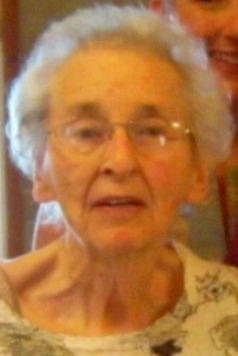 Harriet Elizabeth (Walker) McGill, age 90, was born to George and Marion Mitchell Walker on February 1, 1925, on the family dairy farm in Grant County, Wisconsin. She passed away on May 28, 2015, in Pueblo, Colorado. She is survived by her children, Steve (Paula) McGill, Diana (Bruce) Gifford all of Pueblo, and by Scott (Toria) McGill, of Colorado Springs. She is also survived by five grandchildren: Chris (Alexa) Gifford of Juneau, Alaska; Shannon (Don) Bradshaw of Baltimore, MD; Dylan (Addie) McGill of Colorado Springs, Ian (fiancée, Rebekah Courtade) of Colorado Springs and MacKenzie McGill of Colorado Springs. In addition, Harriet is survived by six great-grandchildren: Elliot, Lars, Wade, Kate, Ole and Lochlan. She was preceded in death by her parents, her sister, Jean Walker Theiler and her husband of forty-two years, Lewis A. McGill, Jr. who passed away in 1988. As a teen and young adult, she excelled at tennis and office skills. She graduated from Platteville, Wisconsin High School in 1942, and attended Platteville State Normal School before going on to Madison Business College in Madison, Wisconsin. It was there that she met her future husband, Army Air Corps soldier, Lewis McGill, at a Masonic Center activity on May 10, 1944. They married on August 4, 1946, in Platteville. Over the years, she worked as a secretary for several educational institutions and businesses as the family moved as a result of Lewie's career in mining. She loved her grandchildren, adored her great-grandchildren and always enjoyed her dogs over the years. She was active in Eastern Star and a number of church activities over the years. She loved to watch the Broncos and was a die-hard 'Packer Backer.' The family would like to thank all of the University Park Care Center staff members, including Dr. Vargas, for the loving care they provided to our mother, grandmother and great-grandmother. A memorial service and celebration of life will be held on Thursday, June 4th, at 2:00 PM at the Montgomery & Steward Funeral Home in Pueblo, CO. In lieu of flowers, friends are encouraged to send a donation to PAWS for Life, P.O. Box 11208, Pueblo, CO 81001 or through Montgomery & Steward Funeral Directors, 1317 N. Main St., Pueblo, CO 81003. Online condolences, www.montgomerysteward.com