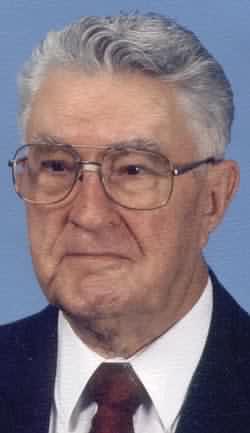 Harold A. Sims, 83, departed this life for a more peaceful one on August 18, 2001. He was born on June 14, 1918, in Paonia, Colorado to Lyle A. Sims and Anna Rebecca 'Bessie' (nee Morrell) Sims. Harold was preceded in death by his devoted wife of 52 years, Velma Cole Sims; his parents; and his brother, Homer L. Sims. He is survived by his daughters, Karen (Wayne) Doerr and Sandra (Damon) Clark, all of Pueblo; sister, Norma Jean (Arlan) Feil of Grand Junction; grandchildren, Caleb Cole Doerr, Brice T. Clark, and Kimbre R. Clark; and special friend, Vivian Hughes. Harold was an award winning State Farm Insurance Agent for 43 years. In business, he truly enjoyed serving his customers many of whom became lifelong friends. Harold served as a Technical Sargent in the Army Air Corps during World War II. He was active in the United Methodist Church serving on official boards and as an annual conference delegate for many years. Harold was an involved member of Silver State Lodge No. 95, A.F. & A.M. and a Shriner. Harold spent his youth ranching in Paonia; this lead to a lifelong passion and respect for God's earth. He loved to garden and he enjoyed summertime trips to farmers' markets in the area. He was a loving, devoted family man and will be greatly missed. He will lie in state on Tuesday at the funeral home from 9 a.m. until 6 p.m. Funeral service will be 10 a.m. Wednesday, August 22, 2001, at First United Methodist Church, 11th and Court, with Reverend Jean Schwien officiating. The funeral service will conclude with the Rose Croix Service. Military honors by Pueblo Veterans Ritual Team and interment will follow at Roselawn Cemetery. Friends may direct gifts to the Masons' Scholarship Fund or the Sims' memorial fund at First United Methodist through the funeral home.