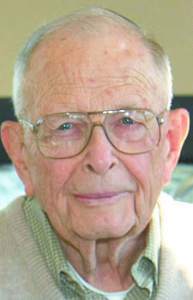 Harlan J. Clouse, 91, passed away peacefully on Wednesday, March 26, 2014. He is survived by his loving wife of 69 years, Helen Clouse; his son, John Clouse; and his daughter, Lana Jean Gourdin (Rick Swartwood). His family also includes four grandchildren, three great-grandchildren; and numerous nieces, nephews and in-laws. Harlan was born March 9, 1923, in Windsor, Colo. After graduation, he enlisted in the Army Air Corps. At Love Field in Dallas, Texas, he met Helen, who was in the Women's Army Corps. They moved to Pueblo in 1953, where Harlan taught industrial education at first Corwin, then South High. A skilled woodworker and metalsmith, Harlan loved working with his hands. He enjoyed camping, fishing and spending time at the cabin he built near San Isabel. He had a lifelong interest in his German heritage, and he and Helen enjoyed their travels to Europe and abroad. A memorial service will be held at 1 p.m. Saturday, March 29, at Montgomery and Steward, 1317 N. Main St., with a reception to follow. In lieu of flowers, the family respectfully requests donations to the charity of your choice. The family would like to thank the staff of Sharmar Care Center and SolAmor Hospice for their friendship, support and care.