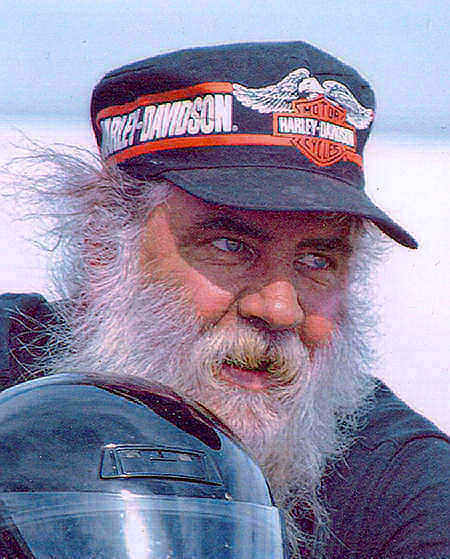 Gregory Wayne 'Griz' Robinson, 56, passed away May 20, 2009. Survived by his wife, Denise; daughters, Gracie and Lesley; mother and stepfather, Joan and Jay Wampler; uncle, Dave (Vera) James; aunts, Carmaline Campbell, Eileen Waitman and Evelyn Butler; sisters and brothers-in-law, Mona Earnhart, Diana (Jim) Scott, Sheryl (Lee) Mosher, Linda (Bryan) Ricke, Dennis (Donna) Stewart and Terry (Kelly) Stewart; special friends, Basco and Chopper; cousins, nieces and nephews; and brother, Richard. Preceded in death by his father, Lester Eugene Robinson; grandparents, Joe and Mary James, and Lester and Lelia Robinson; uncle, Bill Campbell; mother-in-law, Grace Stewart; father-in-law, Hobert (Marge) Stewart; sister-in-law, Marcia Stewart; and brother-in-law, Bob Ryan. Griz was born July 2, 1952, in Pueblo, and was a lifelong Pueblo resident. He enjoyed spending time with his wife and girls. Piling the girls in the sidecar, the family traveled to many locations. From camping in Tin Cup, Colo., cruising the Black Hills and Sturgis, S.D., soaking in the warm mineral baths of New Mexico, to spending time at the Stewart family cabin in Rye, all the vacations were so memorable. Griz also enjoyed the time he spent volunteering for the Pueblo County High School Band, while Gracie and Lesley were members. Griz was a well known fixture in the Colorado motorcycle community. He was the owner and operator of The Chop Shop, since 1975, and was known for doing excellent work. He loved the challenge of taking on jobs which other shops would turn away. He had a passion for Pan Head Harley Davidsons and had quite an impressive collection, of which he rode a different bike to work everyday. Additionally, Griz raced Top Fuel Harley drag bikes for 30 years. In 2000, he was inducted into the Motorcycle Hall of Fame at the Rocky Mountain Cycle Museum, located in Colorado Springs. In 2004, he was the first Colorado racer to break the 200 mile-per-hour mark in the quarter-mile, hitting 202 MPH. Later that year, at the Sturgis Dragway, Griz won it all! In 2006, Griz upped his quarter-mile mark to 211 MPH; a record he still holds today. Special thanks to his pit crew, Frankie (Paulette), Jaws, Bullwinkle, Dee, Ralph, his sponsors and all who supported and cheered him on for so many years. Griz and Denise have participated in every Toy Run since its inception in 1977. No matter how cold or how much snow was on the ground, you could count on seeing him there. Griz was a member of All Harley Drag Racing Association, National Hot Rod Association and Pueblo County Band Boosters. There will be no viewing. Cremation, Montgomery & Steward Crematorium. Celebration of his life, 1 p.m. Wednesday, May 27, 2009, at Pueblo Motorsports Park, 3733 N. Pueblo Blvd. Those who desire may make memorials to Yaffe House( St. Anthony Hospital's hospitality home) or the Pueblo Chapter of Brain Injury Association of Colorado, through Montgomery & Steward Funeral Directors, 1317 N. Main St., Pueblo, Colo. 81003. Online condolences, www.montgomerysteward.com