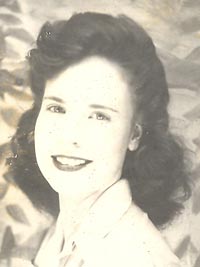 Grace E. (Bergman) Osborne, 82, of Pueblo, Colo., passed from this life peacefully on Feb. 1, 2007, in Pueblo, Colo. Grace was born on Sept. 26, 1924, to Fred and Edith Kirchmar. She was preceded in death by her husband, Kenneth C. Osborne; bothers, Ray, Alfred, Carl, Billy Jake and Freddie; and sister, Agnes Hotaling. She is survived by her daughter, Carlene 'Ginger' (Robert) Woods; stepdaughters, Julie (Randy) Sabados, Gail (Bill) Baer, Jamie (Steve) Rollert and Tina (Rich) Pearson; grandchildren, Devan (Lanaci) Woods, Jonathon Sabados, Anna (Kyle) Mueller, David Rollert and Elizabeth and Katie Baer; great-grandchildren, Danielle, Zachary and Hannah Woods; sister-in-law, Vera Kirchmar; numerous nieces and nephews, other family members, and dear friends. Grace spent the younger years tending bar in the Pueblo, Colorado Springs and Denver areas until 1977 when she met and married Kenneth C. Osborne. Ken was her best friend and loving companion. They loved to travel, and did so for many years before they settled in California and remained there until Ken's death in 2005. She then returned to Pueblo to be close to her daughter and family. Grace was a liberated woman before it became fashionable, she had a joy for life and people and a resilience that was amazing. Music was her passion and she had a beautiful singing voice. She will be greatly missed by family and friends. Our sincere thanks to Sangre de Cristo Hospice and Sharmar Care Center for the loving attention they provided at all times. In lieu of flowers, donations may be made to the Alzheimer's Charity on behalf of Sharmar Village and their Memory Walk. A celebration of Grace's life will be planned at a later date. Online condolences, www.montgomerysteward.com