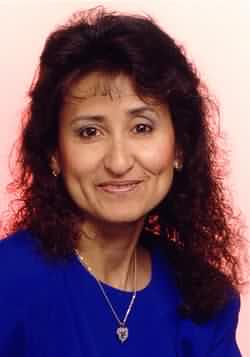 Pueblo West resident Gloria McFail, 52, died Friday, February 16, 2001, at University Hospital in Denver after a lengthy illness. She has gone home to her God and her Angels. Born June 16, 1948, in San Antonio, Texas, Gloria was a graduate of Fox Tech. She attended business school and worked as a data processor for, among others, Sears and EDS Systems. At the time of her death, she was an advertising and layout specialist for The Pueblo Chieftain. Gloria was active in her community and she enjoyed taking part in many holistic and wellness activities. She also was an accomplished stained glass artist. An animal lover, she was a member of the United States Dog Agility Association, the top competition venue in the growing worldwide sport of dog agility. Two of her 'rescued' dogs, Bitsy, a Chihuahua mix, and Bear, a Bichon Frise, qualified in regional meets for the national finals of the USDAA before her illness forced her to retire from the physically demanding competition circuit. She leaves behind to mourn her loss her husband, Eric, of Pueblo West; stepdaughters, Janet (Wayne Uyatiny) McFail of Pine Junction, Colorado, Jennifer (Tony) Hernandez of Tallahassee, Florida, Dr. Julie A. McFail of Woodstock, Illinois; and stepson, Christopher McFail of Lakewood, Colorado; special friend, Rose Geremia of Pueblo West; her mother, Ascencion Ortiz of San Antonio; her mother-in-law, Teresa Leader of St. Petersburg, Florida; sisters, Santa (Adam) Barrientes, Diana (Joe) Rieger, Patricia (Joseph) Baez and Sandra (Emilio) Pena, all of San Antonio; brothers, Jose (Sylvia) Villanueva, Peter Ortiz, Gilbert (Mary Ann) Ortiz, Leroy (Minnie) Ortiz, Danny (Michelle) Ortiz, and her favorite niece, Lisa (Mando) De Le Cruz, and numerous other nieces and nephews, all of San Antonio. There will be no viewing. By her wishes, cremation. A memorial service will be held at 1 p.m. on Tuesday, February 20, 2001, at the Montgomery & Steward Chapel, 14th and Main streets. In memory of Gloria, in lieu of food and flowers, contributions to the Pueblo Animal League and its noble cause would be appreciated. Memorials may be made through the funeral home office.