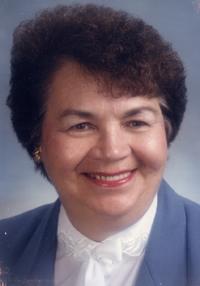 Geraldine Suzanne Hoffman Kroschel born on Sept. 26, 1920, to Louis and Stella Hoffman in Juniata, Neb., passed away March 12, 2005, in Pueblo, Colo. Predeceased by her parents; her husband, Ruthven August Kroschel; sisters, Verna Zimmerman and Jeanette and Margaret Hoffman; brothers, Charles and William Hoffman; and grandson, Raymond Peter Kogovsek, Jr. Survived by daughter, Eulice Kogovsek (Kathy Wise), Pueblo, Colo.; granddaughters, Lisa Marie Kogovsek, Cincinnati, Ohio and ToniRae (Curtis) Andres; and great-grandson, Reece Andres, Windsor, Colo. Also siblings, Gertrude (Robert) McDougall, Calif., Bernice (John) Pfeiff, Garden City, Kan., Leonard (Virginia) Hoffman, Tempe, Ariz., Jody Pfeiff, Gilbert, Ariz., Louis Hoffman, Tempe, Ariz., Arlene McManis, Tempe, Ariz. and John Hoffman, Laveen, Ariz. Also survived by many nieces, nephews and friends. In 1936 at age 16, she moved with her family from Nebraska to the San Luis Valley to escape the ravages of the dust bowl. There she graduated from Hooper High School and began employment at St. Joseph Hospital in Del Norte as a receptionist. She retired in the mid-70s as administrator and chief financial officer of the then hospital and nursing home complex. She had become a friendly face and trusted advocate for patients, families and community members. People always looked to 'Geri' for assistance and advice. While in Del Norte, she met and married Ruthven Kroschel; they were married for 36 years. After his death, Geri moved to Tempe, Ariz. to be near her family. There she obtained her real estate license and took pride in working with first-time buyers, helping them with budgeting and financing to qualify for their first home purchase. She quickly established a wide and caring circle of friends in her new community. She was active in her church as a lay minister and belonged to Catholic Daughters, Sodality and Rosary Group. Later, when poor health began to curtail her physical activities in the outside world, she opened her home as a bed and breakfast and the world came to her. She spent the last months of her life with her daughter under the care of hospice. Geri valued life; she cherished her friendships and socializing with her family, especially her granddaughters. She enjoyed gardening, particularly flowers and vegetables, working on her charity projects and playing pinochle. Her gladiolas always took first place at the County Fair. She lived her life passionate about helping others throughout the world and preserving this earth. As per her request, there will be no viewing. A graveside service will be held 12 noon Wednesday at the Del Norte Cemetery in Del Norte, Colo., with the Reverend Father William Gleeson, V.F., officiating. Memorials may be made to Sangre de Cristo Hospice and Palliative Care or Food For The Poor, c/o Montgomery & Steward Funeral Directors, 1317 N. Main St., Pueblo, Colo. 81003. Online condolences, www.montgomerysteward.com