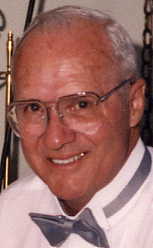 Dr. George W. Meyers, 84, passed away December 1, 2003, in Pueblo, Colorado. Survived by his wife of 57 years, Mary Jane Meyers; children, George Meyers of Pagosa Springs, Colo. and Sherri (Mike) Pickard of Pueblo; and sister, Marie Woolard of Pueblo. George was born March 14, 1919, in Pueblo, to Caroline and Julius Lester Meyers. He served in the U.S. Navy SeaBees during WWII. George loved animals and the great outdoors. In addition to operating his own veterinarian business for 51 years, George was a veterinarian for Colorado Racing Commission. He also served as president of the Board of Santa Fe Credit Union for 17 years, life member of BPO Elks No. 90 and Pueblo Lodge No. 17, AF&AM. As per his request, his body was donated to the Anatomical Board of the State of Colorado. His memorial service will be held 2 p.m. Thursday, Dec. 4, 2003, in the Montgomery & Steward Chapel with a tribute by Harry Meddings. In lieu of food and flowers, memorials may be made to Sangre de Cristo Hospice or American Cancer Society through the funeral home. Online condolences, www.montgomerysteward.com