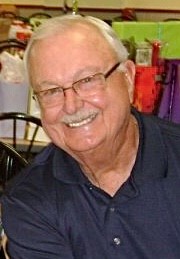 Floris was born on Oct. 9, 1931, in Buckholts, Texas. He was the middle son of the late Herman and Lydia Fuchs. He attended High School at Buckholts High where he excelled in basketball and track. When Floris wasn’t in school, he spent his days working on his family’s farm.

On July 6, 1990, Floris married the love of his life, Robin Fuchs, and they enjoyed many activities throughout their 31-year marriage. Whether they were cruising the countryside on their motorcycle, exploring new areas in their camper trailer, or simply enjoying retirement on their houseboat on Pueblo Reservoir, there was always a good time to be had.

A born self-starter and entrepreneur, Floris owned many successful businesses throughout his lifetime. He worked alongside his wife for Fuchs Enterprises, a company they owned and operated, until his retirement in 2012.
With his huge personality and witty sense of humor, Floris was a magnet to all that met him and he had many close friends. His family meant everything to him, and days spent with his wife, children, grandchildren and great-grandchildren was always a highlight in his day.