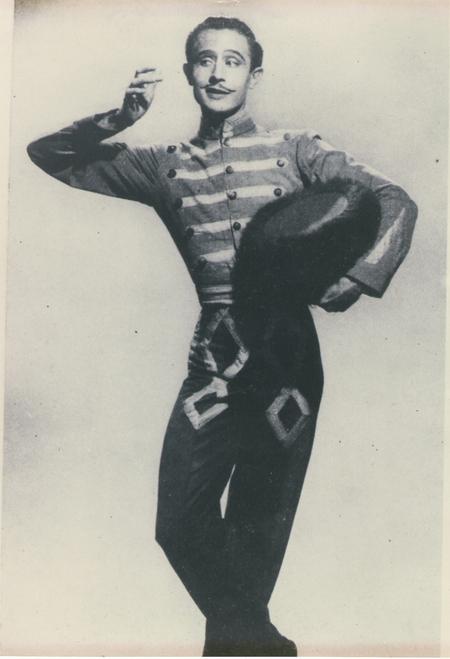 The well-known ballet dancer, choreographer, and teacher, Fernando Schaffenburg, died in the early hours of March 6, 2009, at his home in Pueblo, Colorado, from the complications of a recent surgery. He would have been 84 years old, next month. Mr. Schaffenburg was born in Mexico City, D.F. on April 2, 1925, one of three brothers born into a family steeped in music and European culture. He trained for ballet in the late 1930s and early 1940s at the Mexican School of Dance, and became a _premier danseur_ of the Ballet of the City of Mexico. Mr. Schaffenburg came to the United States to join American Ballet Theater in NY City in the late 1940s, and did two American tours and one European tour with that company. He partnered many famous ballerinas of the time, including Nana Gollner, Alexandra Danilova, Maria Tallchief, Yvonne Chouteau, Moscelyne Larkin, and Nathalie Krassovska. Mr. Schaffenburg also worked with many renowned choreographers including Leonid Massine, Anthony Tudor, Jerome Robbins, Bob Fosse, Agnes DeMille, and George Balanchine. In the early 1950s he left ballet for Broadway where he appeared in 'A Tree Grows in Brooklyn,'Paint Your Wagon,' and 'Arabian Nights.' He then returned to the ballet stage, joining Sergei Denham's New York based Ballet Russe de Monte Carlo as a soloist, and toured the United States. Shortly thereafter, he became the lead dancer in the original cast of the Broadway production 'My Fair Lady.' After leaving the production Mr. Schaffenburg moved to Texas to teach ballet in El Paso, Texas, in the late 1950s, and, from there moved to Dallas to teach with the celebrated Edith James School in the early 1960s. In 1964, Mr. Schaffenburg was invited to become head of the ballet division in the Theatre Arts Department under chairman, Walter R. Volbach, following the death of its first head, David Preston. He was Chairman of the Department until retiring in May of 1988. While at TCU Mr. Schaffenburg was a driving force in dance education on a national level, leaving an enduring legacy and reputation of excellence both on stage and in the class room. His tenure at TCU made the school one of the best training grounds in the nation for ballet and modern dance. In the early 1960s Mr. Schaffenburg was asked to direct the Ft. Worth Ballet Association, which eventually evolved into Texas Ballet Theatre. After retiring from TCU, he and his wife, ballerina Karen Pedersen Schaffenburg, moved to Pueblo, CO, where in 2000 they were invited to head the Sangre de Cristo School of Dance. Mr. Schaffenburg was a Renaissance man and a connoisseur, fluent in English, Spanish, French, and Italian. He possessed a prodigious literary and fine arts background, and was a first-rank choreographer. He is survived by his wife, Karen Pedersen Schaffenburg; his daughter, Ingrid of Los Angeles; his former wife, ballerina Nancy Benson Schaffenburg of Pittsburgh; two sons, Kurt Schaffenburg and his wife Patricia of Dallas and Carl Schaffenburg of Philadelphia; his older brother, Karl, a surgeon in Washington, D.C.; and hundreds of former students who perform and teach ballet throughout North America. Mr. Schaffenburg was a true _maître de ballet en chef_, of the old school in the same mold as the great teachers of the last century, Enrico Cecchetti and Agrippina Vaganova. He loved Romantic Ballet, especially the ballet 'Giselle.' All of us were privileged to have known him. The world of ballet has lost one of its great practitioners. We shall never see another like him, and he will be sorely missed. At his request there will be no viewing. Cremation, Montgomery & Steward Crematorium. Memorial service, 4 p.m. Sunday, March 8, 2009, in the Montgomery & Steward Chapel. Online condolences, www.montgomerysteward.com