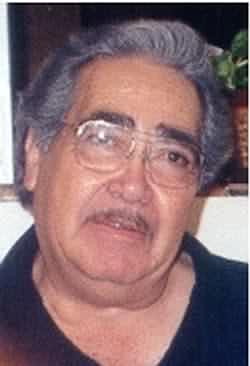 Faustin B. Padilla, 64, passed away April 29, 2001. Survived by his wife, Martha 'Marty' Padilla of the family home in Pueblo West; daughters, Celina Padilla of Beaver, Utah and Patricia Padilla of Denver; brothers, Cipriano (Dora) Padilla and Alex (Pia) Padilla, both of Espanola, New Mexico; sister, Leila (Floyd) Quintana of Colorado Springs; grandchildren, Serena Padilla and Skyler Hooper; numerous nieces and nephews. Preceded in death by his parents, Donicio and Celina Padilla; 1 brother; and 1 sister. Born February 15, 1937, in Ranchitos, New Mexico and served his country in the U.S. Army. Faustin and Marty would have celebrated their 40th wedding anniversary in July of this year. Faustin was a professional land surveyor and a member of VFW in Espanola, New Mexico. He will lie in state at the funeral home from 9 a.m. until 6 p.m. today and 9-11 a.m. on Wednesday. Rosary and Funeral Mass will be held 1 p.m. Wednesday, May 2, 2001, at St. Pius X Church, 3130 Morris, with Rev. Father Bill Huber as celebrant. In lieu of flowers, memorials may be made to a charity of donor's choice through the funeral home.