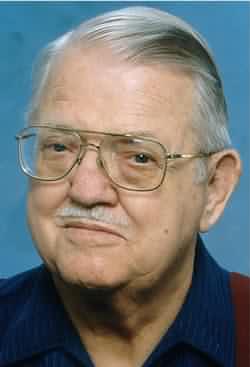 Eugene Alfred 'Gene' Miller, 78, of Pueblo, died May 4, 2001. He was born in Protection, Kansas to Elias and Nettie Miller. He graduated from Cheraw High School in 1941. He graduated from Goshen college with a B.S. degree, and completed his M.A. degree in Educational Secondary Education at Colorado State College in Greeley. He taught at Alameda High School and he coached football. He went to Barranquitas, Puerto Rico to teach, coach basketball and serve as the Dean of Boys. In Puerto Rico he met his wife, Hildegard Peters. He was Dean of Men and was the basketball coach at Hesston College. Gene was director of Frontier Boys Village, in Larkspur, Colorado, and the director of Argentine Youth Services in Kansas City, Kansas. He taught social studies at Laredo, Texas, and in Loveland, Colorado. At Robinson School, Santurce, Puerto Rico, he was principal of the High School. He is survived by his wife, Hildegard Peters Miller, whom he married in 1950; son, Philip (JoAnn); daughter, Ramona; three grandchildren; brothers, Adrian (Myrtle), Lewis, and Eldo (Bertha); sister, Susie Neuschwanger; sisters-in-law, Mamie Miller and Maurine Miller.He was preceded in death by his parents; son, Steven Eugene; daughter, Jeanne Ann; brothers, Earl and Glen. Viewing will be held at Montgomery & Steward Funeral Home on Monday, May 7th, from 4 - 7 p.m. The graveside service will be held at 10 a.m. Tuesday, May 8, 2001, at Fairview Cemetery, in La Junta; the memorial service will follow at 2:00 p.m. at the First Presbyterian Church, 10th & Court Street, in Pueblo, with Deborah Kehle Como officiating. Memorial donations may be made to Colorado Boys Ranch, La Junta, directly or through the funeral home.