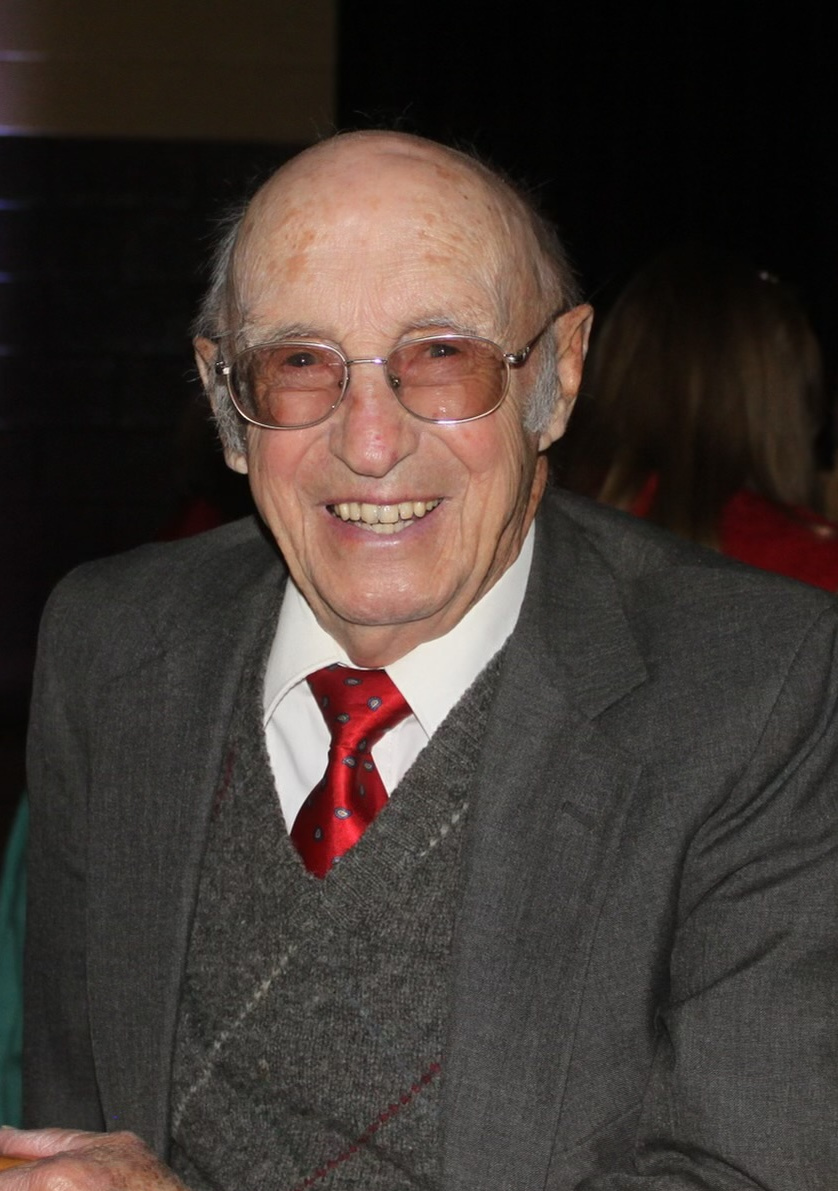 Ernest Ballotti
b July 2, 1926 – d January 20, 2022
As a former educator and child advocate, Ernie Ballotti stood for the kid that didn’t have a parent in the stands. He was that person that showed up to give encouragement, help purchase a uniform or just give a pat on the back. He selflessly devoted his entire life to the care and well-being of children.
Ernie was born in Walsenburg, Colorado to Ernesto Ballotti and Beatrice nee Pini. He lost his father in a coal mine collapse when he was ten and was sent, with his surviving family members (mom Beatrice, brothers Giacomo and Geno, and sister Mary) to the Mooseheart orphanage near Batavia, Illinois. There he played every sport, participated in choir and plays, learned the welding trade, and graduated high school. Upon high school graduation Ernie enlisted in the Navy and was sent to boot camp at the Naval Station Great Lakes in Illinois. He participated in the Pacific theater until he was honorably discharged in 1946.
After rejoining his family in Walsenburg, he went to Adams State College and earned a BA in Business with a minor in Education. While at Adams State he was a member of the football team and sang in the choir as a tenor. Upon graduation he started his career in education in Sanford, Colorado and proceeded to teach music at Pleasantview in District 70 in Pueblo. He then moved to District 60 where he first taught at Fulton Heights elementary school, before moving to Freed Middle School. About this time Ernie met and married the love of his life, Joyce, and adopted two young daughters, a dog and a cat. In the subsequent years he and Joyce would welcome three additional kids and many more animals to the household.
He then moved to Centennial High School and taught English and music for several years. While working as a teacher he returned to school to earn a Masters degree in Education from Adams State College. He then became the Assistant Athletic Director for all four high schools in District 60. As Assistant Athletic Director he attended nearly every sporting event including Special Olympics, and scheduled the dozens of necessary officials, security, and ticket takers. It was his work for the district that earns him a number of honors, including induction as a charter member of the Greater Pueblo Sports Association, an honorary member of the Colorado Football Officials Association, a member of the Political Action Committee for Education, and induction into multiple other statewide education and sports associations and groups. But even more importantly, this is when he made many of his lifelong friends.
Ernie took early retirement from teaching at age 55 and started an insurance agency for Farmers Insurance, where he worked well into his 70s. A special highlight of these later years was being nominated to carry the Olympic Torch for the winter Olympics in Utah in 2002. Not surprisingly, Ernie was selected to be the first runner in Colorado Springs kicking off the festivities where he generously shared the torch and took many photos with kids and other spectators and subsequently shared his experience and the torch with local grade schools.
Ernie loved Colorado, nature, wildlife, and the changing seasons. He was a big Bronco fan attending most of the home games over the last 20 years. He was an avid fly fisherman – tying his own flies, hunted for mushrooms, explored any bumpy dirt road in his sedans, climbed 14ers to get to the best fishing holes and generally lived life with zest! He loved his family, and most other people he met, unconditionally.
Ernie is survived by his sister Mary (Tom) Urban, wife Joyce (nee Habib) Ballotti, daughter Manetta (Dennis) DeRemer, daughter Paula Errett, son Brian (Michelle Wallace), daughter Kerry (Tom) Nutter, and daughter Kristin (Eric) Ballotti; grandchildren Paul (Brooke) DeRemer, Christopher (Leanne) DeRemer, Kylie Errett, Daniel Ballotti, Allison Ballotti, Mike Nutter, Maggie Nutter, Jessica Nutter and great grandchildren Laurel DeRemer, Hayes DeRemer, Skye Errett-Gray, Linden DeRemer, Ruth DeRemer, and Hannah DeRemer and many, many other nieces, nephews, cousins and special in laws.
Funeral will be held 10 a.m. Wednesday, January 26, 2022, in the Montgomery & Steward Funeral Chapel, 1317 N. Main Street, Pueblo, Colorado, followed by a reception. Burial will be at 1 p.m. Thursday, January 27, 2022, at Saint Mary’s South Cemetery, Walsenburg, Colorado.
In lieu of flowers, please make contributions to Mooseheart orphanage (www.mooseheart.org) or to the charity of your choice. Livestream at www.MontgomerySteward.com