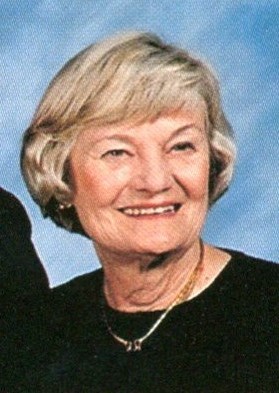 Ernamarie Trefz Williams was born in Hermann, Missouri in 1928 and she lived the majority of her life in Pueblo. She loved her community and she was grateful for the opportunities her immigrant parents found to succeed in Pueblo. Ernamarie spent much of her life trying to give something back to Pueblo and she loved the RiverWalk, the Arts Center, the views of Pikes Peak and the wonderful celebration of diversity represented by this community. Ernamarie, or Omy, as she was fondly known to her family of three grown children with spouses and her 9 grandchildren, was educated at Lindenwood College, The University of Nebraska and Columbia University. She was recently honored as an Outstanding Woman of Pueblo which was a capstone to a life filled with community, family and friends. Ernamarie served on the Wells Fargo Community Board of the bank started by her father in the 1940s and she was a member of the Wednesday Morning Club for 50 years. She helped organize the SRDA and the Pueblo Area Agency on Aging, and served on many boards and foundations as well as the vestry of her beloved Church of the Ascension. She is preceded in death by Henry, her husband, who died in December 2014 and she leaves her children, Eleanor, Elisabeth (Lisa) and Richard as well as their beloved spouses Dennis Clark, George Ireland and Debbie Williams; and grandchildren, Hilton, Hannah and Malcolm Clark, Katherine, Louise and Gus Ireland and Rob, Michael and Jack Williams. A memorial service will be held at 4 p.m, Saturday, October 17, at the Church of the Ascension, 420 W. 18th St. Online condolences, www.montgomerysteward.com