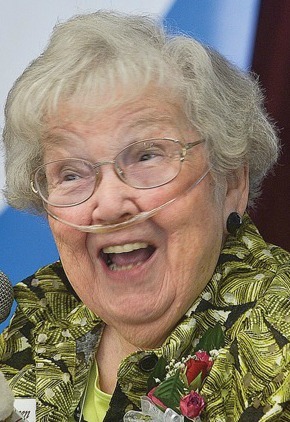 Emily (nee Eaton) Sutton died on March 21, 2016, after a brief hospitalization. The Primrose Retirement Center resident was 86 years old. Perhaps better known as Miss Emily, she was the Children's Librarian at Canon City Public Library during the 1980's and 1990's. She was also appreciated as an animated and talented storyteller throughout southern Colorado. She last delivered one of her stories with her puppet dog, Nebbie, for the Silver Queen Competition in this past summer's Colorado State Fair. Born in New Bedford, Massachusetts on June 13, 1929, she was the last girl in a family of five other sisters, all raised by their widowed mother during the Great Depression. Emily was a smart student and aspired to be an engineer until told by admissions at Boston University that engineering was not a profession for women. She graduated from New Bedford High School in 1947 and was married to Harold J. Sutton in 1948. Emily loved books and libraries, and it fit naturally that she worked in a number of libraries throughout her life, from the University of Denver to Rocky Ford Public Library to ultimately Canon City Public Library. Perhaps one of her proudest moments, however, of her career came when she and son, Peter, both received their Bachelor's Degrees in the same ceremony from Southern Colorado State College in June 1974. The family moved to the west when her husband attended the Iliff School of Theology in Denver. Emily was a supportive pastor's wife, fulfilling many church duties at United Methodist churches in Fleming/New Haven, Colorado, Adriance in Pueblo, and La Junta United Methodist Church. She was also an accomplished knitter, baker, and house decorator. Emily is survived by two sons, Stephen (Carolyn) of Baltimore, Maryland and Peter (Melanie) of Pueblo; a cherished chosen daughter and son, Sandy and Robert Zingg of Pueblo West; six grandchildren; and 12 great-grandchildren. A short service of celebration, 2 p.m. Thursday, March 24, 2016, at the Primrose Retirement Center. Online condolences, www.montgomerysteward.com