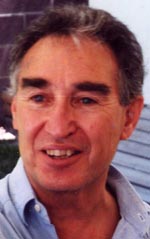 Edward Moya, 66, passed away at his home December 14, 2003 calmly, gracefully, as was his soul's intention. He died a hero. Survived by wife, Sandra Hunter, step daughter, Jillian Hunter Charlifue, dear mother Virginia Moya, daughters. Kim, Julie, grandchildren, sisters May Tanguma, Angela Algiene; brother in law John Hunter (Susan), and extended family. Ed waged a valiant battle against pancreatic cancer. Given several weeks to three months to live, he set out to fight, surviving over 19 months and led an active, quality life until very recently. A miracle. Much gratitude to Ed's cousin Jerry Pena for driving Ed to the University of Colorado, cousin Bob Pena for frequent calls of cheer, niece Shirley Montoya for unfailing support, and brother in law, John Hunter, for daily visits with Ed and driving him to the University of Colorado. Thanks to Dr. Scott Holden, University of Colorado, who joined Ed in an aggressive battle using clinical trials to give him additional time while forwarding research. Also to Dr. Greg Berens who offered wisdom, faith, and good cheer to the end. A memorial dinner is to be held at a later date. No services will be held in keeping with Ed's decision that the time to pay one's respects is when the person is alive and aware- when it truly matters to one who is ill. Tomorrow isn't promised to anyone, not the young nor old. Today may be your last chance to not let words go untold. If you're waiting for tomorrow, why not do it today? If tomorrow never comes, you could regret the day That you didn't take the time for a smile, a call, a kiss Too busy to grant someone what you know they miss. Say 'how do you feel?', 'anything I can do?', or 'it's okay'... And if tomorrow never comes, you'll have no regrets about this day. Pancreatic Cancer is the 4th leading cause of cancer in the America. It has a 99% mortality rate, striking approximately 30,000 Americans each year, and each year 30,000 people die. Life expectancy is 3 to 6 months. Research is limited by lack of interest and funding. The federal government invests less money in this cancer research than in any other cancer. Donations can be made to the Lustgarten Foundation for Pancreatic Cancer Research, 1111 Stewart Avenue, Bethpage, NY 11714, or in care of Montgomery & Steward Funeral Directors. Contributions can also be made by credit card, dialing 1-866-789-1000.