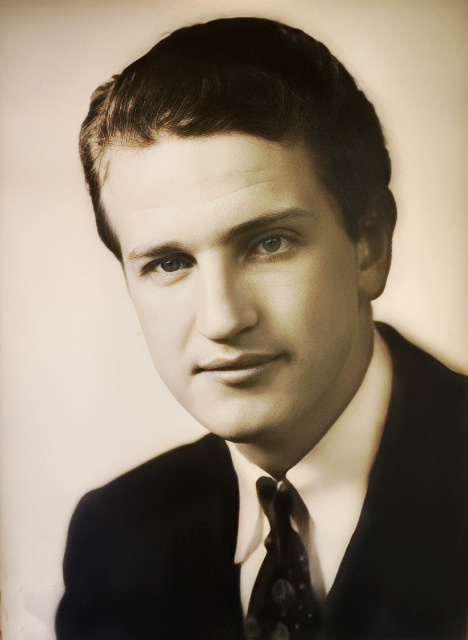 Born to Frances M. Kochevar and Phillip J. Yaklich, in the small mining town of Crested Butte, Colorado, “Eddy” was the youngest, with three siblings: Phil, Frances and Fred. Though all proceeded him in death, their influence persisted throughout Ed’s 101 years. He was enormously proud of his parents’ coal mining and hard-working heritage. Stories of 4:00 a.m. cow milking, followed by after-school milk peddling, in a horse-drawn sleigh through chest-high snow, burrowed into many conversations.

A student at the University of Colorado, Ed became smitten with his future wife, Jeannette Luther, at a Student Union dance. “It was that yellow seer sucker dress and that gorgeous smile” that caught his eye. Their romance collided with WWII’s call to service. Ed trained to become a Naval pilot. Upon earning his wings, with a 3-day layover, snatching two strangers off the street as witnesses, Ed and Jeannette (Jan) were married in Pensacola, Fla. on March 7, 1944. After the war, they moved back to Boulder, where Ed finished law school. By the time they moved to Pueblo, Colorado to set up a practice, 3 of their children, Phil, Ronnie and Joanie were on the scene. Judy arrived later.

A liberal Democrat, Ed had strong convictions that embraced diversity and equality. He shook the hand of John F. Kennedy with the same vigor as a migrant farmworker. Discrimination was abhorrent to him. His law firm hired the 1st female attorney in Pueblo when all other firms closed their doors. He collaborated to install the 1st handicap-accessible sidewalk in Colorado, served as President of the Easterseals, Southern Colorado Democratic Chairman, as well as District Judge.

Ed loved parties! The more the merrier. The more often the better. He embraced his mother’s adage, “Wherever the sheep are gentle, there is always room for another”. Whether at legendary Christmas parties in their castle-like house in Pueblo, their ranch in Westcliffe, or his La Paz home, Nuesta Casa, all were welcome and hundreds came. Quick to share insights and stories, Ed’s intergenerational circle of friends loved his company, many considering him their mentor. A trusting handshake meant more to him than a contract, and friendship was paramount. His desired epitaph carved onto his stone was the driving principle etched into his life:
“His only footprint: to be and become a friend”

“I cannot imagine this planet continuing to spin on its axis without the bright light of Ed Yaklich. He was beyond unique, sparkling blue, with a wonderful candor and humor.”

“Ed will always be in our hearts as a friend who brought joy to our lives.”

From Ed’s gardener and dear friend in Mexico:
“I lost a great man that I loved with my heart. He was very important in my life. Something beautiful. My love was sincere and will not end.”
From daughter Joanie’s heart: “Dad had the heart of a poet and musician. He often said he would have liked to have been a conductor. He loved to listen to me play my violin, and piano and sing. I would see my music come alive in his brilliant blue eyes. My heart smiled every time.”

From daughter Judy’s heart: “I knew my Papa as both flawed and fabulous. Like all of us, he could cause great pain, but also great joy. I knew him to be brave and foolish. exasperating and endearing. I count it my deep privilege to be alongside him as he grew old. I miss him desperately, and am grateful he is now fully fledged… finally free.”

Ed’s 3 remaining children, Phil, Joanie Houston, and Judy Mandeville, 6 remaining grandchildren; and 6 great-grandchildren will treasure his legacy and the memories we hold so dear.

There will be a Rosary at 10:00 a.m., slide show to follow, Funeral Mass at 11:00 a.m. Saturday, Aug. 20th at Our Lady of Assumption Roman Catholic Church in Westcliffe, CO. The interment immediately follows at Ula Cemetery, followed by a Celebration of Life at Shangri-La Ranch, 1180 County Rd.129.