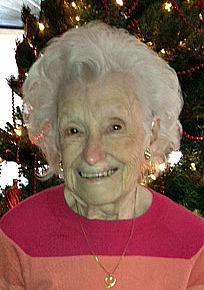 E. Maurine Marcum, 91. Born October 9, 1921, in Pittsburg, Kans., and died peacefully at home January 16 , 2013. She is preceded in death by her husband, James S. Marcum of Pueblo; three sons, Terry, and twins Larry and Jerry, who died at birth; parents, William and Ida (Warrick) May of Batesville, Ark.; brothers, Milan May of Fox Lake, Ill., and Kenneth May of Pueblo, Colo. She is survived by son, James K.(Kathie) Marcum of Pueblo, and daughter, Deborah (Thomas) Vinopal of Phoenix; grandchildren, Tonia of Salt Lake, Angelique of Louisville, Ky, Megan of Phoenix, Katie of Austin; and two great-grandchildren, Henry and Amelia. After moving to Wilmette, Ill., she graduated from New Trier H.S. (nickname 'Tiny'). Soon after, she began work at Lloyd Hollister Publications (Time Life) as a typesetter for over thirty years. She bravely ventured alone on the train to Tacoma, Wash., in 1942, to marry James, her H.S. sweetheart of 61 years. There, she assembled binoculars for the war effort. She enjoyed ice skating, travel, dolls, sewing and roller coasters! After moving to Pueblo in 1985, she enjoyed listening to the summer Municipal Band. Everyone who ever met her seemed to love her and would not be surprised to learn that she kept her Irish sense of humor to the very end. At her request, there will be no viewing or funeral service. Private family entombment was held. Donations in her name can be made to Pueblo Municipal Band, Inc., Box 9205, Pueblo, CO, 81008, or Sangre de Cristo Hospice, 1207 Pueblo Blvd. Way, Pueblo, CO, 81005. Online condolences, www.montgomerysteward.com.