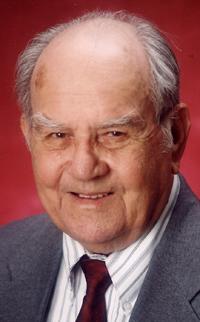 Donald L. Beckman, 83, of Pueblo, Colorado, passed from this earth to his heavenly home on Wednesday, July 27, 2005. Donald was born on August 22, 1921, in West Point, NE, to Fred Earl Beckman and Edna Potter Beckman. He was preceded in death by his parents; step-parents; 3 brothers; and his beloved daughter, Diana. He is survived by his loving wife, Patricia; son, Jim (Cindy) Beckman, Spring Valley, OH; daughters, Lynn Davis and Patti Carleo (Robert Potter), Pueblo, CO; brothers, Richard (Dalphna) Beckman, Denver, CO, and Kenneth (Mary Lou) Beckman, Albuquerque, NM. Grandchildren who he loved and made his life interesting are Tsgt. Michael (Pauline) Beckman, Kadena AFB, Japan, Christopher (Erin) Beckman, Charleston, SC, Carrie Davis, Denver, CO, Bob, John and Shane Davis, Pueblo, CO, Shea Clendenning, Denver, CO, David Beckman, Pueblo, CO, Donald J. 'DJ' Potter, Pueblo, CO; four great-grandchildren; as well as numerous nephews and nieces who he cherished. Donald was raised in Nebraska, Kansas and Colorado, and worked in the Oakland and San Francisco shipyards during WWII. Don returned to Pueblo after the war and worked for Barbara Neon Signs and then joined IBEW #12 in 1947. Don retired from the electrical trade in 1986 with 40 years of service. Don's passion in the late 40's thru the mid 60's was racing midgets and stock cars. He raced mainly in Pueblo but also raced in Colorado Springs, Canon City, Salida, and occasionally Denver. When Don retired from racing in 1964, his passion became fishing and he enjoyed many camping and fishing outings with his family. During the last 3 years of his illness, Don was an inspiration to all who knew him with his determination to outlive his doctor's June 2002 prognosis of 2-3 months to live. During this time, Don took great pleasure in being at home with his family and enjoyed visits from his friends and Hospice care givers. He was brave to the end and brought hope and laughter to all who knew him. There will be no viewing. Memorial service will be held 11 a.m. Monday, August 1, 2005, in the Montgomery & Steward Chapel. Interment will follow at Mountain View Cemetery. Memorials may be made to Sangre de Cristo Hospice or the American Cancer Sociey, c/o Montgomery & Steward Funeral Directors, 1317 N. Main St. Pueblo, Colorado, 81003. Online condolences, www.montgomerysteward.com