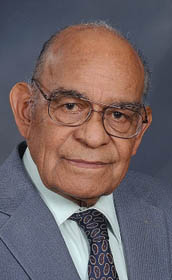 David Correa, 84, passed away March 3, 2010. Survived by his children, Mike (Susie) Correa, Sharon (Bill) Olson, Tim (Diane) Correa and Doreen (Ken) Amirault, all of Pueblo; siblings, Phyllis (Don) Sandoval of Chula Vista, Calif., Arturo Correa of Pittsburgh, Calif. and Silas Correa of Arvada, Colo.; sisters-in-law, Anita Otis and Irene Paulsen; 11 grandchildren and 29 great-grandchildren. Preceded in death by his wife, Myrtle Correa. David was born Aug. 4, 1925, in Omaha, Neb. to Manuel and Clara Belle Correa. He graduated from Trinidad High School, served in the U.S. Navy during WWII and after returning from the service, completed his education by graduating from Trinidad Junior College. He moved to Pueblo in 1950 and retired from the Pueblo Army Depot having worked as a Pershing missile electronics repairman. David taught his children to be hard and honest workers. He stressed the importance of having the right tools for the job. His tool for life was Jesus Christ and he let everyone around him know. He was not ashamed of the Gospel and never hesitated to share his testimony. David received his calling from God in the trenches of the South Pacific. After escaping death narrowly in numerous campaigns, and after two ships sank from underneath him and a plane he was riding in crashed, he promised he would dedicate his life to God's service. After he returned home, he fulfilled that commitment when he felt a calling to help the deaf community. In 1954, he held his first interpretive service and spent the rest of his life as a minister and friend to the deaf and blind. He also spent many years driving his truck with the famous 'white box' on it, doing handyman jobs for many widows and others who needed help in the community. His favorite hobby was picking up everything from bolts to hubcaps which were considered his 'precious metals' collection! Thanks to Joe, Tim and Brandon from Visiting Angels and to Sangre de Cristo Hospice for the care they gave David. A special thanks to Susie Correa for her immense help by being the family's eyes, ears and legs during the past year. Viewing from 2 to 4 p.m. Sunday and from 5 to 7 p.m. Monday in the Montgomery & Steward Chapel. Service, 10 a.m. Tuesday, March 9, 2010, at Family Worship Center, 3800 Parker Blvd, with Pastor Dave Smith officiating. A sign language interpreter will be participating at the service. Military honors by Pueblo Veterans' Ritual Team and interment will follow at Imperial Memorial Gardens. In lieu of flowers, memorials may be made to Sangre de Cristo Hospice through Montgomery & Steward Funeral Directors, 1317 N. Main St., Pueblo, CO 81003. Online condolences, MontgomerySteward.com