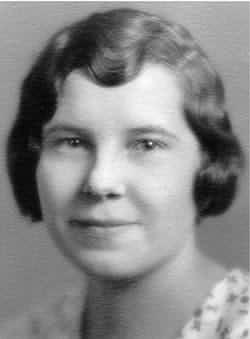 Daisy M. Wolfenbarger, went to be with the Lord on April 26, 2001. She was born October 1, 1907, in Pawnee, Oklahoma, the oldest of four children, born to George and Rebecca Mack. She had one older half-brother and two older half-sisters, who were also raised by her father and mother. She grew up and attended school in Pawnee, and later moved as a young lady to Arizona where she entered nurses training at St. Mary's Hospital in Tucson. In 1933 she married Harry A. Wolfenbarger, whom she had cared for as a patient in Tucson. They moved to Colorado in 1934, on a ranch in the Graneros Area where they raised three children and lived for 26 years. After their children had reached high school age, Daisy was able to return to the profession of nursing that she loved, working first at the Colorado State Hospital. In 1960 the couple sold the ranch and moved into Pueblo, and in 1963 she went to work as a nurse at the then new Pueblo Manor Nursing Home, and later at Parkview Hospital where she remained until she retired from nursing. Predeceased by her beloved husband, Harry; her parents; one brother; three sisters; numerous brothers and sisters-in-law; and one grandson. She is survived by her son, Harry Wolfenbarger Jr., Dodge City, Kansas; son, Richard Wolfenbarger (Pamela Heaton), Pueblo, and daughter, Daisy (David) Peterson, Greensboro, North Carolina. Mrs. Wolfenbarger is also survived by nine grandchildren, Tami (Gary) Gale, Lori (Joe) Pacheco, Lynnie, Randie and JonErik Wolfenbarger, all of Pueblo, Julie Wolfenbarger of Copeland, Kansas, Gayla, and Harry Wolfenbarger III, both of Dodge City, Kansas, and Kurt Peterson of Greensboro, North Carolina; three great-grandchildren, Evan and Mikaela Pacheco, and Mitchell Gale, all of Pueblo. Surviving also are brother, Leroy (Jane) Mack; sister, May Beauchamp; and brother- in-law, Lyle Shaw, all of Tucson, Arizona; and sisters-in-law, Juanita Griffin and Mildred Bundy, both of Pueblo, along with numerous nieces and nephews, great-nieces and great-nephews; and many wonderful friends. Daisy loved her Lord and Savior Jesus Christ, and spent many hours praying for her family, church and friends, to whom her life was devoted. Her greatest desire was for people to come to know Jesus Christ, to serve Him and to read and study His Word. She will lie in state at the funeral home Thursday and Friday from 9 a.m. until 6 p.m. The funeral service will be held 10 a.m. Saturday, May 5, 2001, at Praise Assembly of God, 2000 Troy Ave., with Pastor Clifford Ball of Cornerstone Baptist Church of Pueblo, Pastor James Beck of Pueblo, Pastor Steve Johnson of Colorado Springs, and Pastors Bobby Wilson and Mark Apodaca of Praise Assembly of God. The family will receive friends and relatives at a dinner in the Praise Family Life Center following the interment at Mountain View Cemetery. Memorials may be made to her church, Cornerstone Baptist of Pueblo, through the funeral home office.