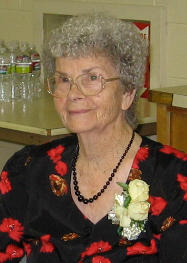 Christine P. Binder, 93, passed away July 24, 2013. Born Christine P. Bucklen near Karval, Colo., on June 30, 1920, the 7th of 16 children born to Robert E. and M. Victoria Bucklen. After high school she moved to Pueblo, working at the Colorado State Hospital where she met a fellow employee, her future husband, John F. Binder from Eads, Colo. On April 15, 1941, they were married and would go on to enjoy 55 years together. After living briefly in Wichita, Kans., during the war, they returned to Colorado in 1943, living and farming a few miles west of Lamar until 1954, when they moved back to Pueblo and returned to working at the Colorado State Hospital from which they would both retire. She enjoyed her family, her home, and stitched numerous quilts over the years, some of which were shown at the Colorado State Fair and some received awards. Late in 2012, she moved to Denver to be nearer her son. Christine is survived by her two children and their spouses, Carol (Terry) Kerner of Grants Pass, Ore., John R. (Colleen) Binder of Englewood, Colo.; three grandchildren and their spouses, Paul (Leticia) Kerner of Las Vegas, Nev., Tracy (Daniel) Jacobson of Medford, Ore., Ann (Mark) Stedman of London, England; two great-grandsons, Austin Kerner of Las Vegas, Nev. and Andrew Stedman of London, England; two sisters and their spouses, Virginia (Miller) Reese of North Hills, Calif., and Louise (Leslie) VonSeggern of Greeley, Colo.; as well as numerous nieces and nephews. She was preceded in death by seven brothers and six sisters. Funeral service, 11 a.m. Monday, July 29, 2013, Montgomery & Steward Chapel. Interment, 2 p.m. at Roselawn Cemetery. Memorial contributions may be made to the Alzheimer's Association through the funeral home. Online condolences, www.montgomerysteward.com