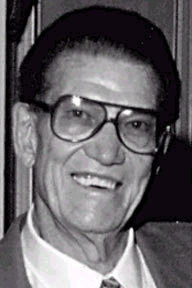 Charles H. 'Charlie' Bollinger passed away November 9, 2001. Survived by his wife, Marie Bollinger of the family home; children, Dr. Bruce (Cindy) Bollinger, Temple, Texas and Charlene 'Shawnee' Bollinger of Pueblo. Also survived by his sister-in-law, Peggy Byrd of Denver; grandchildren, Emily Bollinger, Tyson Bollinger, Marc Bollinger and Zachary Bollinger, all of Temple, Texas. Preceded in death by his parents, Charles L. and Una E. Bollinger. Charlie was born on July 20, 1916 in Pueblo and was a lifetime Pueblo resident. He founded Bollinger Confectionery in 1934 and sold the business in 1998, due to ill health. He loved to play golf and was a true Denver Bronco's fan. Charlie requested no viewing nor service. Cremation, Montgomery & Steward Crematorium. A Tribute To Charlie No one ever touched my heart in such a gentle way until there was you. I've discovered something wonderful about you . . . something that took me by surprise. I've known for a long time that you were someone special, sensitive, gentle, romantic . . . always bringing out the best in me. But now I realize that you're so much more that that . . . You're my friend, the best friend I could ever imagine. I never dreamed that such a perfect combination could exist in one person. But you are and here I am . . .loving you. For my sweetheart, My special friend. You loving wife, Marie