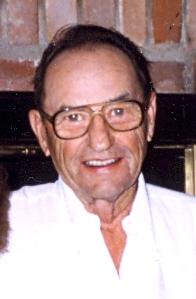 Charles 'Chick' Giddeon Cadwell, 86, passed away unexpectedly, April 29, 2012, while recuperating from hip surgery. His beloved wife, Shirley (Louie) Cadwell, preceded him in death on October 27, 2010. During her long illness, Chick would drive 100 miles a day to be with her. They shared a happy and wonderful life together for over sixty years. Survived by his son, Jim (Shirley) Cadwell; granddaughter, Samantha Cadwell, all of Southern California; sisters, Helen (Bob) Veith of Southern California and Emma Morgan of Oregon; brother, John Cadwell of Illinois; sister-in-law, Charlene Salmans of Pueblo; brother-in-law, Cliff Bailey of Pueblo; nieces, Janie Dean of Pueblo, Joan (Louis) Esquibel of Castle Rock, Teena (Jim) Smith of Florida, Cathy Gaines of California, and Betty Kennedy of California; nephew, John (Roxann) Cadwell of Pueblo and Wes (Barbie) Salmans of Virginia. Chick was born to Moses and Anna (Shimenek) Cadwell October 10, 1925, at their home in Orchard Park, Colo. Chick attended Boone School until 1941. After the death of his father in 1941, he left school to help contribute to the support of his family. Chick was drafted into the United States Army in November of 1943 and was assigned to 167th Infantry Regiment of the 31st Infantry Division. His first combat action was in New Guinea in 1944 and continued with his arrival on the Island of Morotai. An article in the Rocky Mountain News sent by army correspondents indicated that on Christmas day 1944, Private Charles Cadwell along with others in his group began an 11-day patrol in search of enemy snipers. The uncharted terrain of Morotai was so dense with jungle and ragged peaks that in one day the men moved only about 350 yards from sunup to sundown. Several men were marching with towels around their feet instead of shoes, which were ruined shortly after the march began. When the company began the return trip on New Year's Day, it was necessary for them to radio for artillery fire so they could determine their location. 'It was the worst march we've ever been through,' declared Private Cadwell. Chick's combat duty finally ended in the Philippines in the last battles of WWII. He was awarded numerous medals, including the 'Liberation of the Philippines' Medal. On May 29, 1991, PRIVATE FIRST CLASS CHARLES G. CADWELL, UNITED STATES ARMY, was awarded THE BRONZE STAR Medal for meritorious achievement in ground combat against the armed enemy during World War II in the Asiatic Pacific Theater of Operations. After WWII, Chick returned to Boone and worked for Mr. Charles Bell for many years, around 1960 Chick went to work with his brother, Frank, who owned Cadwell's Trucking. Chick retired from the Pueblo County Highway Department. After retiring, Chick volunteered with the Care and Share Food Bank in Pueblo. During his later years, Chick enjoyed gardening, fishing, the Broncos, the Rockies and his Western movies and TV shows. Service, 10 a.m. Saturday, May 5, 2012, in the Montgomery & Steward Chapel. Interment, Roselawn Cemetery. Online condolences, www.montgomerysteward.com