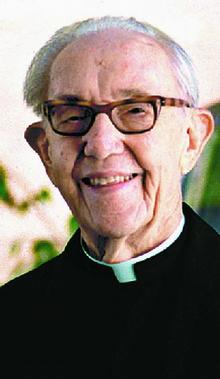 The Most Reverend Charles A. Buswell, Retired Bishop of Pueblo, Colorado, 94, passed away June 14, 2008. Survived by his nephews, Charles, Charley, and Patrick; niece, Melanie; and many grandnieces and grandnephews. Preceded in death by his siblings, Mary Maloney, Joseph Buswell, Lillian Bishoff and Dorothy Ley. Charles was born Oct. 15, 1913, in Homestead, Oklahoma, to Charles and Bridget Buswell. He received his primary and secondary education at the cathedral's St. Joseph School, studied for two years at St. Benedict's College in Atchison, Kans., and in 1933, entered St. Louis Preparatory Seminary in Webster Groves, Missouri. After studying theology at Kenrick Seminary in St. Louis, in 1936, he entered the American College in Leuven, Belgium. He also served as Prefect and assistant editor of the American College Bulletin during his studies. Charles was eventually ordained to the priesthood on July 9, 1939. After returning to the United States, Charles became the first pastor of Christ the King Parish in Oklahoma City, in 1947. He was raised to the rank of a Privy Chamberlain of His Holiness in 1949, and later a Domestic Prelate of His Holiness in 1955. In 1959, Charles was appointed the second Bishop of Pueblo by Pope John XXIII. On Sept. 30, 1960, he received his episcopal consecration. Charles attended the Second Vatican Council from 1962 to 1965, and described the Council's mission as making the Church 'a dynamic organism to penetrate the world with a spirit of truth and light' and not 'a static remnant of past glory.' In 1980, after over 20 years of service, he resigned as Pueblo's bishop. Viewing from 4 to 7 p.m. Tuesday and 9 a.m. to noon Wednesday in the Montgomery & Steward Chapel, 1317 N. Main St., Pueblo. Viewing also from 1:30 p.m. until Vigil service time Wednesday at Cathedral of the Sacred Heart. Vigil service, 7 p.m. Wednesday, June 18, 2008, and Mass of Christian Burial, 11 a.m. Thursday, June 19, 2008, with The Most Reverend Arthur N. Tafoya as celebrant. Both services at Cathedral of the Sacred Heart, 11th and Grand, in Pueblo. Entombment will follow at Roselawn Cemetery. In lieu of flowers, those who desire may make memorials to Posada or Centro de los Pobres (Migrant Ministry) through Montgomery & Steward Funeral Directors, 1317 N. Main St., Pueblo, Colo. 81003. Online condolences, MontgomerySteward.com