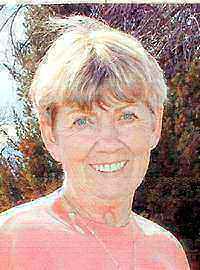 Carolyn Elaine Johanson passed from this life to eternal peace November 17, 2006, following a courageous and dignified fight with Huntington Chorea and a recent diagnosis of ALS. Her parents, Wayne and Helen Tinkel of Mishawaka, Indiana; brother, Dale L. Tinkel; and granddaughter, Emily Irene Rainiero precede her in death. Carolyn Johanson (Tinkel) graduated from John Adams High School, Mishawaka, Indiana in 1962, attended Indiana University for two years (1972/3), and earned her Paralegal certification in 1986. She was selected in 1977 as one of the 'Outstanding Young Women of America'. Carolyn was noted for her groundbreaking efforts in women's rights, and her strength in advocating and supporting family rights. She was the first woman police officer in the city of South Bend, IN, where she served honorably and with distinction for seven years. She was a charter member of the International Association of Women Police Officers. Her last position was court monitor for the Social Security Administration. Carolyn met Raymond Johanson while both were attending classes at Indiana University, and they were married on August 23, 1975, in South Bend, IN. She was a staunch supporter of her husband's US NAVY career, and while they were stationed at Subic Bay Naval Base, Philippines, Carolyn designed, established and served as the Director of the US Navy's very first Family Advocacy Center, which became the prototype for all subsequent military family support centers and family advocacy centers worldwide. She was also the humble recipient of numerous several letters of commendation from the South Bend Police Department, the US NAVY and the US AIR FORCE for her exceptional work. She is survived by her husband, Raymond and their 4 children: Ben Johanson of South Carolina, his wife, Gail and their 2 daughters, Ashley and Taylor; Gregory Johanson of Logan, UT, his two children, Joshua and Amber; Cheryl McDaniel, her husband Michael and two children Brittany and Brian, and Wendy Rainiero, her husband David and their two children, Olivia and Leo. Also surviving her are her four brothers, Terry Tinkel of North Carolina, Dean Tinkel of Mishawaka, IN, Keith Tinkel of New Carlisle, IN, and Roger Tinkel of Plymouth, IN. Funeral services will be at the St Aloysius Church in Rye, CO on Tuesday, November 21, at 1:00 P.M. Those who desire may make memorials to YWCA Women's Crisis Center or YWCA Counseling Program through Montgomery & Steward Funeral Directors, 1317 N. Main St., Pueblo, Colo. 81003. Online condolences, www.montgomerysteward.com