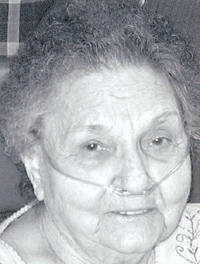 Carol C. Sheppard, 91, went to be with the Lord on May 15, 2008. Born on March 4, 1917, in the mountain community of Log Cabin, Colorado, to Albert E. and Charlotte I. (Kelly) Ball. Four years later, her mother married George W. Johnson. She was preceded in death by her parents; siblings, James Ball, Lloyd Ball, George Johnson, Lila Haynes and Renna Ackelson. Carol is survived by her children, Donald (Judy) Seder, Janice (Cullen) Wall and Thomas (Lori) Sheppard, all of Pueblo, Merilee (James) Briggs-Mead of Pueblo West, William (Linda) Seder of Colorado Springs and Loretta (William) Way of Fort Collins; siblings, Alberta Knipple and Anna Mae Grenz, both of Fort Collins, Leata (Richard) Dangler of Loveland, Rosa Lee (John) Shurtz of Sun City, Ariz., Joseph (Ann) Johnson of Riverside, Calif.; 30 grandchildren; and several great-grandchildren. She attended school in LaPorte and also Timnath, where she met and married Herman Seder and settled into the demanding tasks of farm life. While farming in the Timnath, Windsor, Brush and Wellington areas, the couple had four children. She later moved to Pueblo, married Merle L. Sheppard, and assisted in his upholstery business and store. The birth of their two children completed her family. Carol was known affectionately as 'Gammy' and was a wonderful mother and grandmother. She shared entertaining stories about being part of a large family, and had a delightfully mischievous sense of humor. She loved country and gospel music, was a great dancer (even with a feather duster in her hand) and was an excellent cook and seamstress. She crocheted many beautiful keepsakes for her family to cherish always. She will remain forever close in the hearts of all who knew her. A special thanks to her hospice care team and the Life Care Center staff. Memorial service, 11 a.m. Monday, May 19, 2008, at Damon Runyon Repertory Theatre, 611 N. Main St., in Pueblo. In lieu of flowers, memorials may be made to Sangre de Cristo Hospice, through Montgomery & Steward Funeral Directors, 1317 N. Main St., Pueblo, Colo. 81003. Online condolences, www.montgomerysteward.com