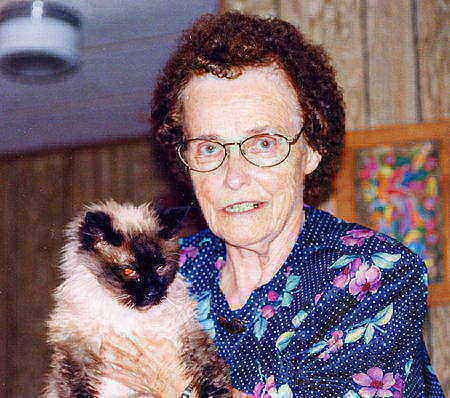 C. Lucille Wehmeyer July 28, 1918-November 7, 2010 Reverend C. Lucille Wehmeyer, retired Methodist Minister, died on November 7, 2010 in Colorado Springs, Colorado. Rev. Wehmeyer was born July 28, 1918 in Vassalboro, Maine. She is preceded in death by her parents, Carroll Hollis and Nellie (McCoy) Spaulding, her brother, Rev. C. Merton Spaulding and her husband, Clayton Wehmeyer. Rev. Wehmeyer was awarded her degree by Perkins School of Theology, Southern Methodist University, Dallas Texas in 1963. She was ordained a Deacon in 1962 and an Elder in 1964. Rev. Wehmeyer's ministerial career spanned many years and from 1969-1988 she was with the Kansas West Conference of the United Methodist Church. Rev. Wehmeyer was a pastor at United Methodist Churches in Miltonvale, Woodston, Kill Creek Parish, Manter and Logan Kansas. Rev. Wehmeyer retired from the Kansas West Conference in 1988 and relocated to Canon City, Colorado where she faithfully attended and volunteered for the First United Methodist Church. The retired Reverend Wehmeyer joyfully worked with families and children throughout her life. A celebration of Reverend Wehmeyer's life will be held at 4 p.m. on Wednesday, November 10, 2010, at the Montgomery Steward Chapel in Pueblo, Colorado. Rev. Wehmeyer is survived by her four nephews, Samuel, Giles, Brent and David Spaulding, of Colorado Springs and 8 great nieces and nephews and 5 great-great nieces and nephews.