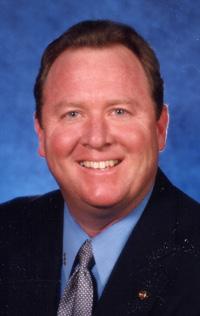 Bruce F. Brandt, 46, loving son and brother, wonderful friend and companion passed away on March 1, 2006. Bruce was born in New York on May 26, 1959. He moved with his family to Tucson, Arizona in 1973. A graduate of Salpointe Catholic High School, he attended Northern Arizona University and the University of Arizona before joining the family business, Hank Brandt Associates where he raised funds for religious and non-profit organizations. His expertise and ability to inspire generosity raised millions of dollars that benefitted Catholic churches and charities nationwide. Bruce took his position as Executive Director of the Catholic Diocese of Pueblo Foundation in 2000. He loved living in Pueblo, boating on the lake and made many friendships that sustained him in his final days - especially the love of his companion, Dorothy Cook. Bruce was preceded in death by his father, Hank Brandt, and is survived by his mother, Joan Brandt; his brother, Hank (Julie) Brandt III; his sister, Regina Brandt; his nephew, Hank Brandt IV; niece, Rachel Brandt and by friends and relatives across the country. He will lie in state Friday, March 3, 2006, from 10 a.m. to 6 p.m. in the Montgomery & Steward Chapel. A funeral mass will be held 11 a.m. Saturday, March 4, 2006, at St. Pius X, 3130 Morris Ave., with the Most Reverend Arthur N. Tafoya, D.D. as celebrant. Concluding services and interment will be held in Tucson, Ariz. In lieu of flowers, the family requests that donations be made to the Year-End Appeal of the Cathedral of the Sacred Heart, through Montgomery & Steward Funeral Directors. Online condolences, www.montgomerysteward.com