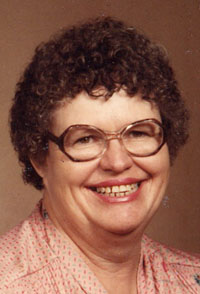 Betty Mae Cartmell, 70, of Pueblo West, Colorado, went into the arms of her Lord on April 22, 2005. Betty was born March 22, 1935, the only daughter of Alfred and Audrey Zinn of Cheraw, Colo. She married William R. Cartmell on July 16, 1958. He preceded her in death on Sept. 22, 1994. Survived by and greatly missed by her children, Connie Goodwin, Diana (Warren) Allen, Kay (Ron) Singleton, Billie Jo (Reggie) Garcia, all of Pueblo and William (Trey) Cartmell of La Junta; her grandchildren, Jodie, Arianne, Bobby, Ryan, Brandi, Bryan, Lisa, Jenny, Naomi and Nathan; and great-grandchildren, Abbigail, Tayton and Joseph. Betty is also greatly missed by numerous other loving relatives and friends. Betty served in hospitality and housekeeping for 25 years at St. Paul United Methodist Church, Pueblo, and worshiped with her family at Praise Assembly of God Church, Pueblo. Betty was licensed in nursing at St. Mary Corwin School of Nursing in 1955 and practiced nursing at Colorado State Hospital for several years. Her joys in life were giving to and ministering to her family and to many others. She was selfless in giving and service, and was a testimony of optimism and strength, even throughout a lengthy illness. Her gentle spirit blessed all who came near. Viewing at the funeral home Monday from 10 a.m. to 6 p.m. with the family present from 11 a.m. to 1 p.m. Funeral service will be held 10 a.m. Tuesday, April 26, 2005, at Praise Assembly of God, 2000 Troy, with Pastor Bobby J. Wilson officiating. Interment, Imperial Memorial Gardens with the family receiving friends and relatives immediately following at the cemetery reception hall. The family may be contacted at 1365 W. Carrizo Springs, in Pueblo West, 81007. The family wishes to express its heartfelt thanks to Dr. Louis Balizet and the team at the Rocky Mountain Cancer Center, as well as the team at St. Mary Corwin Radiation Oncology and ICU, and the fine staff at Legacy Commons Assisted Living Center, Pueblo West. Online condolences, www.montgomerysteward.com