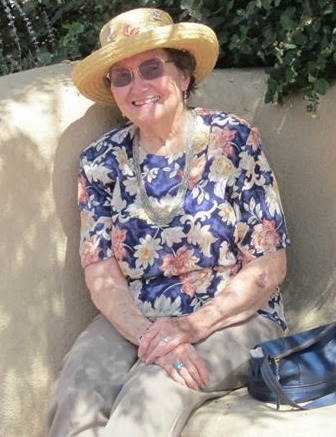 Betty J. Ammann (nee Bunnell) died at home on Dec. 31, 2016, in Pueblo, Colorado, age 92, following a brief illness. She leaves her daughters, Sharon (formerly Donato) Mirabella, and Noralee Hughes and her husband Jim Hughes; grandchildren Susanna (Mark) Donato, Melissa (Ky) Kulesa, Tracy Hughes and Joshua Hughes; great-granddaughters Lydia Donato, Alexandria Lundblade, Breanna Lundblade, Ava Kulesa and Zoe Kulesa; and several nieces and nephews. Her husband, Merv, predeceased her in 2012. Betty was born in Pueblo on April 1, 1924, daughter of Alden Bunnell and Pansy Russell, with her beloved older sister, the artist Dorothy Orr. Betty graduated from Centennial High School in Pueblo in 1942 and attended Colorado State College of Education in Greeley for two years. She married Mervin Ammann on Dec. 2, 1943, in Pueblo. Marriage and WWII brought many adventures, including living for a time in Tennessee; running Merv's Meat Market in Pueblo with Dorothy and Verd Orr; and working at First National Bank, where the 'girls' drew stocking-seams on their calves to preserve their hard-to-find stockings while still meeting dress code requirements. Betty later worked for Mountain Bell and in data processing for what is now the Colorado Mental Health Institute at Pueblo. She volunteered as a docent at the Rosemount Museum and was a devoted Girl Scout troop leader. Betty and Merv were well-known among their friends in Pueblo and Beulah as lively square dancers, bridge players and hosts, as well as tireless campers. Betty loved the outdoors. She enjoyed cooking – especially trying new recipes – and coming up with ideas that Merv put into action to remodel the series of homes they owned. Her grandchildren remember eagerly anticipating the holidays once the 'Santa's Workshop' sign went up on her sewing-room door. Involved at First United Methodist Church and Central Christian Church, Betty also enjoyed singing in the choir. She kept a very neat house and managed orderly files of travel destinations as she planned the getaways she and Merv took each winter for many years in their fifth-wheel trailer, traveling to California, Arizona, Texas and Mexico and often serving as campground hosts. She appreciated Southwestern and American Indian art and traveled frequently to Taos, New Mexico. She often could be found with knitting needles in hand, always with a book beside her, and ideally with a dish of ice cream after supper. The family will hold a memorial in Beulah in May. In lieu of flowers, donations can be given to the Heifer Project, 1 World Avenue, Little Rock, AR 72203, the Rosemount Museum, 419 W 14th St, Pueblo, CO 81003 or the Sangre de Cristo Arts Center, 210 N Santa Fe Ave, Pueblo, CO 81003. The family thanks the Sangre de Cristo Hospice and its staff for their exceptional care for both Betty and Merv.