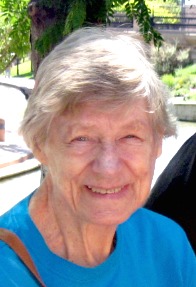 Bettina Lubke of Pueblo went to be with the Lord on December 14, 2019. She was born on September 25, 1933, in Tarrytown, New York, the daughter of Walter and Gertrude (Sandlass) Lubke. Bettina grew up in Washington D.C., later moving to Highland Park, Illinois with her family. She graduated from Northwestern University where she was an art major specializing in interior design. Bettina worked initially in Chicago as an interior designer before moving to New York City where she continued her career and took additional architecture courses at Columbia University. She later followed her sister and her family and made a final move to Colorado.
Bettina loved music and sang alto with the Apollo Music Club in Chicago and with the Pueblo Choral Society. She was an avid reader, enjoyed photography as a lifelong hobby and loved to travel. She was a member of Bethany Lutheran Church in Pueblo, later becoming a deacon, member of the building committee and the Lutheran Women’s Missionary.
She was preceded in death by her parents; brother, Victor Lubke; and sister, Margarete (Kenneth) Krueger. Bettina is survived by her sister-in-law, Carol Lubke of Verona, WI; nieces, Kimberly Krueger of Madison, WI and Katherine Pientka (Kevin Morrow) of Verona, WI; and nephews, Brian (Kindra) Krueger of Katy, TX, Wayne (Betsy) Lubke of Milton, WI and Douglas (Jayne) Lubke of Edgerton, WI. She is also survived by cousins, Alison Carr of Virginia Beach, VA and Elinor Cecil of Easton, MD. Bettina also wished to recognize special friends, Thayer Hubbard, Deborah Grace, Lorraine Clark and Linda Stych.
Memorial services will be held at a later date. Online condolences, www.montgomerysteward.com