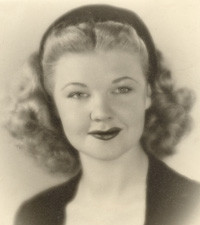 Mrs. Bette Simms Roper, 83, died suddenly on Friday, April 18, 2008, at her Colorado Springs home. Born on October 22, 1924, in Lamar, Bette came to Pueblo as a young girl with her parents, Mr. and Mrs. Charles G. Simms. The only sister to five beloved brothers – Cecil, Bob, Bill, George Jr, and Dick. Bette attended Centennial High School and worked at local businesses until she married Clarence Ray Roper, also of Pueblo, on April 13, 1946. Her husband was commissioned in the new US Air Force in 1950, and the couple spent the next 27 years at various duty stations, until his retirement in 1977. Retiring in Colorado Springs, Bette devoted herself to her family. She was an avid reader, particularly of the history of US presidents, as well as an amateur writer, compiling two collections of family stories. A beloved grandmother in her own right, Bette also was a willing 'Grandma' or 'Aunt Bette' to neighborhood children and was never too busy to instruct on the finer point of kicking a football or hitting a wiffle ball. She was preceded in death by her parents, her husband and all five brothers. She is lovingly remembered by her children – Robert (Jan) Roper, of Aurora; Dr. Susan Datillo, of Colorado Springs; and Peter (Barbara) Roper, of Pueblo along with her adored grandchildren Ryan (Terra), Ramie, Rebecca and Nick and her wider family of sisters-in-law, nieces and nephews. A woman of beauty, grace, and faith, Bette had a wonderful relationship with her Lord Jesus. Her life was a testimony to God's love and transforming power. She was always joyful and full of life; her character was also touched and molded by her faith. Her life reflected this by her complete devotion to her husband and family, her daily acts of love, kindness, and generosity to friends and strangers alike, and her positive attitude even through times of sorrow and pain. Bette leaves a legacy of faith and love and thousands of happy memories to her family. She was the most wonderful mother and grandmother and she will be greatly missed by them all. Her family will see her again in Heaven. Her funeral will be held at 10 a.m. Wednesday, April 23, 2008, in the Montgomery & Steward Chapel. A reception will follow the service. Burial will be at Beulah Mountain Cemetery. Online condolences, www.montgomerysteward.com