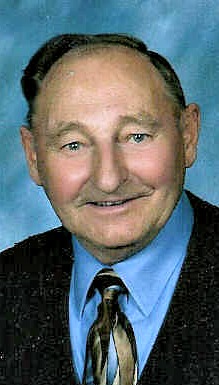 Benno Kurt Schmidt, 87, of Idaho Falls, Idaho, formerly of Pueblo and Pueblo West was delivered from
rapidly declining health on April 4, 2020 and brought home to the heavenly mansion prepared for him
by Jesus Christ, his trusted Lord and Savior. Benno was born April 16, 1932 in Trojatschek, Poland to
Friedrich and Lydia Schmidt. After four and a half years in a work camp following World War II, he lived
in East Germany where he was trained to be a mason. In 1957, he emigrated from West Berlin to the
United States, settling in Chicago where he honed his craft, met and married his travel agent, Elsie
Falkenstein, and started a family. In 1977, Benno moved with his family to Pueblo West, eventually
establishing a highly-regarded masonry business. Known for his exacting standards, Benno practiced his
craft into his eighties. He was an active member of Bethany Lutheran Church and the Pueblo German
Club. He could often be found on a summer evening sitting in the bleachers at Lovell Park, taking in that
night’s softball games. In 2018, Benno moved to Idaho Falls to be closer to family.
Benno was preceded in death by his parents, 1946 and 1988 respectively, his wife Elsie in 1996, and his
sister Ruth in 2018. He is survived by his children, Kurt (Elsa) Schmidt of Tucson, Arizona, Sean (Shannon)
Schmidt of Idaho Falls, Idaho, and Vernon (Ellie) Schmidt of Bermuda Run, North Carolina; grandchildren
Emily, Alex, Christian, Megan, Maarten, and Annie-Catherine; and his sister Gisela Schultze of Grebs,
Germany.
A memorial service and celebration of Benno’s life will take place later this year in Colorado. The family
suggests that donations be made in honor of Benno to: Christian Blind Mission International, P.O. Box
340, Wheaton, IL 60187-0340. Information about the organization can be found at www.cbm.org