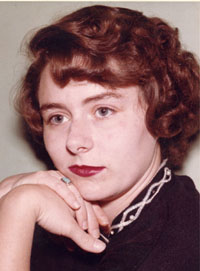 Barbara Jean (Ray) Estes, 64, went home to be with her Lord and Savior on November 27, 2004. Survived by her mother, Margaret Jaquet of South Hutchison, Kansas; sons, Ted and Lance 'Kelly' (Mary) of Pueblo and Kenny of Benson, Arizona; grandchildren, Joshua (who she helped raise), Amanda, Teddy, Michael, Matthew, Heather, Cassandra, Monica, Heidy, Kelsy, and Rebecka; and great grandson, Jonathan. Barbara was looking forward to the birth of Amanda's daughter, her first great-granddaughter, in January. Also survived by her sister, Judy Gilly; and brothers, Bill Ray and Buddy Jaquet, all of South Hutchison, Kansas. Preceded in death by her father; her only daughter, Cindy; and grandmother, Betty DeWeece. Born to James and Margaret Ray, March 29, 1940, in Pueblo, Colorado. Barbara lived in the Pueblo area for many years and was a devoted member of Praise Assembly of God. She was well known by family and friends as the peace maker and had a strong love for her family and the Lord. She will be sadly missed and never forgotten. Cremation, Montgomery & Steward Crematorium. Memorial service, 10 a.m. Friday, December 3, 2004, at Praise Assembly of God, 2000 Troy Ave., with Pastor Bobby J. Wilson officiating. A reception for family and friends will be held after the services at the church. Online condolences, www.montgomerysteward.com