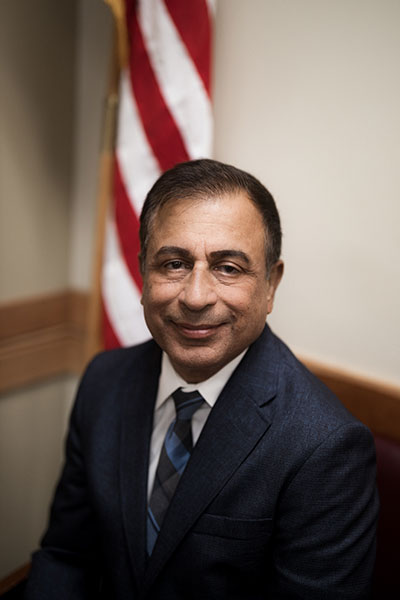 Pueblo mourns physician whose laughter was a part of his healing
Tracy Harmon
The Pueblo Chieftain
Dr. Atul Vahil’s death was attributed to COVID-19, according to his son Neel Vahil.
Vahil, a native of India, made a big impression on Puebloans for his generous, attentive care and ability to share a light-hearted love of jokes.
Vahil founded Digestive Diseases Specialists of Colorado in 2001 and opened the Pueblo Endoscopy Suites — Pueblo’s only local independent, outpatient endoscopy center, in 2004.
He is survived by his wife, Lilly, and sons, Neel and Nalin.
The family did not want to talk about the circumstances of his death.
“I called my dad ‘Pop,’ — he was my hero,” Neel said. “He taught me about values like duty, service, generosity and how even the worst jokes can wash away the harshest parts of life.”
“He had a wonderful sense of humor and not a day, not an hour, went by without him telling a joke. I remember his fabulous laugh and ability to joke, but at the same time he was generous and open with his patients,” said Brenda Caver-Torres, a coworker.
Vahil was triple board certified specialist in internal medicine, gastroenterology and clinical nutrition, according to his website.
“I went to work with him in December of 2003 — he actually hired me before I graduated from nurse practitioner school,” Torres said. “I helped him open the surgery center in 2004 and graduated the same year.”
“He let all his patients know he was there for them day, night, weekends and holidays. He gave out his cell phone number to patients because he wanted to hear how they were doing,” she explained.
Vahil’s son Neel agreed about his father’s devotion to his patients.
“He had a job he loved dearly that enabled him to serve a community with dedication and love. His entire life was dedicated to serving others and making them laugh even in the most difficult situations,” Neel said.
“He took good care of his staff and he was a fabulous doctor. Southern Colorado was blessed to have him as their doctor, and I am going to try to carry on his legacy the best I can,” Torres said.
Neel recalls how his dad spent all night comforting him when at the age of 16 he found and drank a bottle of wine and a couple of warm beers in the garage and became quite sick.
“He was the person who called me five times a day when I went through a breakup or didn’t perform well on a test in medical school. When I was in pain, he was in pain. When I was happy, he was ecstatic,” Neel said.
Neel said his dad lived an incredible life filled with love for his community, patients, family and friends.
“He was stubborn and he lived by a moral code that he refused to surrender for anyone. In 67 short years, he was able to achieve things in medicine and relationships that I can only dream of achieving.
I am quite simply in awe of my father. The thing I am proudest of in my life is that I was his son,” Neel said.
Vahil’s love of life spilled over to Pueblo.
“He loved this city. Even when he was on vacation, he couldn’t wait to get back to Pueblo to go back into work, see his patients and exhibit his magnetic charisma and unbounded humor,” Neel said.
“I miss him dearly and he will always be with me and my family. If there is any solace for me, it is that he lived an amazing life, saw his children grow up to embody his values, had a love for his wife that burned like a fire I’ve never before seen, and got to dedicate his life to the cause of service through medicine.

I always thought we would have more time with him, but I know as I look at the life he lived and how he lived it, that he is eternally at peace. I love you more than the world Pop,” Neel said.

Chieftain and Pueblo West View reporter Tracy Harmon can be reached by email at tharmon@chieftain.com or via Twitter at twitter.com/tracywumps.