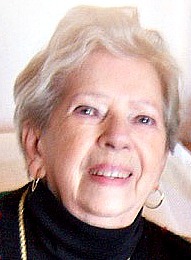 Ann B. Warner was born in Waycross, Georgia on October 13, 1924. She passed away on October 28, 2015 at the Villa Pueblo. Ann is survived by her son, Rob Warner (Elizabeth) and grandchildren, Veronica and Joe of Stuart, Florida; daughter, Carol Warner (Pat McFarland) of Pueblo; sisters, Bev Loggie of California, Pat Griffin (Jerry Hayes) of Texas; loyal friends, Myrna McDowell and Evelyn Stamy. Ann retired from Colorado National Bank (United Bank) in Colorado Springs. She was a manicurist and also worked at the front desk at Canada House(Florida) and Las Encinas Hospital (California). After retirement Ann enjoyed crafts, travel, dog walking and pet sitting. Ann recently represented the Villa for the 2015 Silver Queen contest. She was very honored to have been selected and received the third runner-up award. She was 'thankful' for her friends and the staff at Villa Pueblo. In lieu of flowers, please make donations to PAWS for Life (PO Box 11208, Pueblo Colorado 81001) in her memory. At her request, there will be no service. A celebration of her life will be held in the spring for friends and family. Online condolences, www.montgomerysteward.com ******