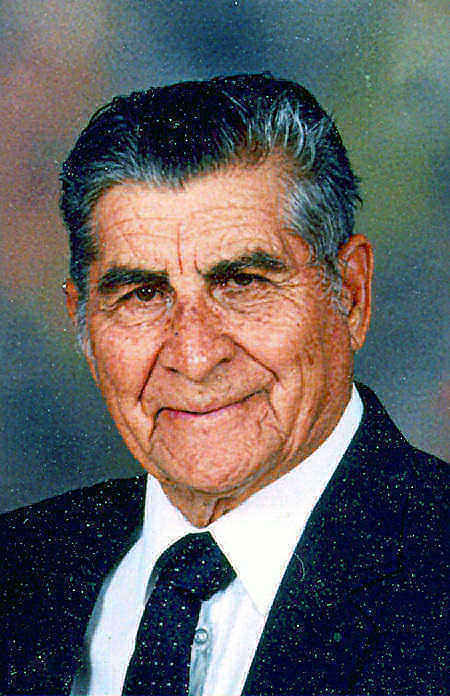 Andres C. Mondragon, 85, of Pueblo, went to be with the Lord on Nov. 24, 2009. He was born in Ranchos de Taos, New Mexico, on November 30, 1923. Preceded in death by parents, Sabino and Francisquita Mondragon; parents-in-law, Claude and Maclovia Aragon; brother, Trinidad; in-laws, Lazaro, Alice (Paul) Vigil, Ernest (Helen) Aragon and Ida Mondragon. Survived by his loving wife of 60 years, Carmen; children, Irma (Herman) Lujan, Shirley, Clarence (Susan), Arlene Cordova, Andy, and Stephanie (Gina Pineda); thirteen grandchildren; nine great-grandchildren; sister, Manulita (John) Mullins; brothers, Ted (Dollie), Gregorio, Moises, Herman (Patsy), and Florencio; in-laws, Claude (Loyola) Aragon, Mary Aragon; numerous nephews, nieces, and friends. Andres was a WWII US Army veteran. He retired from the Pueblo Army Depot after 33 years of dedicated service. The next 20 years he was a Dist. 60 school crossing guard. He was a proud member of the DAV #39, I.O.F., Eagles #145, Senior Citizens, and was actively involved at the Cathedral of the Sacred Heart and had been a Eucharistic minister and usher. Andres was a compassionate, caring and supportive husband, father, grandfather, brother, uncle and friend to all. He was the best…not just one in a million but one in a trillion 'good guy!!!' He took great pride and pleasure in being surrounded by his family especially at holiday time. He enjoyed attending and rarely missed an opportunity to attend family academic and sporting events. He kept busy working in the yard and tinkering in his garage. Everything had a place and useful purpose; organization was his true art. As great as Andy was to us he strived always to be a 'Good Andy' in God's eyes. There is a void in our life that will be difficult to fill. Special thanks to Dr. Christian Hulett and Rhonda, and Ronnie, the staff of Neuro Trauma ICU, and the staff of 3 Southwest at Parkview Hospital. Viewing from 1 to 5 p.m. Tuesday and from 9 to 11 a.m. Wednesday in the Montgomery & Steward Funeral Chapel. Rosary, 6 p.m. Tuesday in the Montgomery Steward Chapel and Mass of Christian Burial, 1 p.m. Wednesday at Cathedral of the Sacred Heart, with Bishop Arthur N. Tafoya as celebrant. Military honors by Pueblo Veterans' Ritual Team and interment at Roselawn Cemetery. Online condolences, MontgomerySteward.com