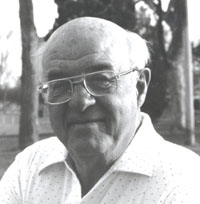 William T. Roush, D.C. passed away December 4, 2004. Survived by his wife, Sharon of the family home; children, Tom (Valinda) of Utah, David (Marianne) of Ohio, Richard (Deb) of Pueblo West, Marilyn Kaye of Pueblo, Kelly (Roy) of Colorado City and Kurt of Colorado Springs; and 12 grandchildren. Also survived by his sister, Ruth Kelly of Pueblo. Bill was born in Pueblo and was a noted chiropractor for many years. He graduated from Centennial High School and Palmer Chiropractic College. Served in the US Army as Chief X-Ray Technician at Beaumont Hospital in Ft. Bliss, Texas. Past President of the Colorado Chiropractic Association and the Pueblo Symphony and was a board member for 12 years of the N.Y. Chiropractic College. During his career he lectured extensively on Chiropractic Treatment. Former Commander of the American Legion and a Mountain Search Pilot for the Civil Air Patrol. Member of the EAA and the Pueblo Rotary Club. There will be no viewing with cremation at Montgomery & Steward Crematorium. A memorial service will be held to celebrate Bill's life 1 p.m. Sunday, Dec. 12, 2004, in the Montgomery & Steward Chapel. An Irish Wake will follow at 2:30 p.m. at Iannes Whiskey Ridge Restaurant, 4333 Thatcher. In lieu of food and flowers memorials may be made to the Pueblo Animal Welfare Shelter in Bill's memory, c/o Montgomery & Steward Funeral Directors, 1317 N. Main St., Pueblo, CO 81003. Online condolences, www.montgomerysteward.com