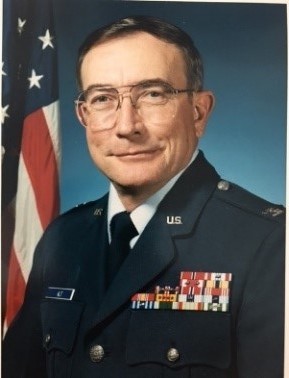 Colonel William E. 'Bill' Alt, USAF (Ret), 80, born in Pueblo Mar. 12, 1936, died Feb. 13, 2017. Preceded in death by his parents, Eugene D. and Leta (Long) Alt. Survived by his wife, Betty, Pueblo; daughter, Brigadier General Eden Murrie (Ret) (Jon), Nashville, Tenn.; granddaughter, Devon Murrie, Nashville, Tenn.; sister, JoAnn (Mike) McCoy, Pueblo; and cousins, Leta (Gary) Wooley, Illinois and Judy (Frank) Urban, Arizona. Colonel Alt was a graduate of Centennial High School, received a B.A. degree from Colorado College and an M.A. from Auburn University. After graduating from Centennial, Bill completed a year at Pueblo Junior College before enlisting in the Air Force. During that time he was stationed at various bases around the U.S. and at Thule, Greenland. He returned to Pueblo, married and in 1964 was commissioned as an Air Force Second Lieutenant. Once again he served at various stateside assignments and overseas in Viet Nam, Australia, and Japan. He was awarded numerous decorations including the Bronze Star and Defense Meritorious Service Medal. As a 'mustang', he was especially proud of his enlisted time and his good conduct medal, something few officers had. After retiring in 1991 to 'the farm' in Pueblo, Bill served on numerous state and local boards. During the ensuing years, he was on the Mined Land Reclamation Board, President of the Colorado State Conservation Board, and President of the Pueblo County Historical Society. At the time of his death, he was President of the Pueblo County Conservation Board, a member of the Levee Board and was the Pueblo County Noxious Weed Manager. Perhaps some will remember Bill for his often humorous spring and summer articles in The Chieftain on Pueblo County's weed problems. At his request, cremation with no services. Those wishing to send a donation in Bill's memory may do so to a charity of his or her choice. Online condolences, www.montgomerysteward.com